GOP and Anti-Marriage Forces Show Increased Willingness to Use Violence 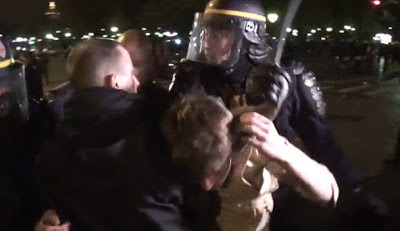 While Teabagistan is going berserk and demanding that Dzhokhar Tsarnaev, the Boston Marathon bombing suspect, be tried as an enemy combatant and that his rights as a U.S. citizen be stripped away, some members of the GOP and certainly some of the anti-gay crowd and their allies in France in particular seem more and more willing to threaten, if not actually use, physical violence.  Illustrative of the growing GOP insanity comes from the Benton County, Arkansas GOP. Political Wire has the money quote:

"We need to let those who will come in the future to represent us [know] that we are serious. The 2nd amendment means nothing unless those in power believe you would have no problem simply walking up and shooting them if they got too far out of line and stopped responding as representatives. It seems that we are unable to muster that belief in any of our representatives on a state or federal level, but we have to have something, something costly, something that they will fear that we will use if they step out of line."   .  .  .  .

I hope that we can do something to make sure the lesson learned by those who represent us in the future is that bad things will happen to you if you follow that precedent.

That's right, gun nuts are supposed to simply shoot members of Congress if they don't knuckle under to the demands for no restrictions whatsoever on gun ownership.  The quote comes from the April newsletter of the Benton County, Arkansas Republican Party.   In France, the allies of the National Organization for Marriage - whom Brian Brown has openly praised - have taken this mindset and put it in action.  During the anti-gay demonstrations yesterday, French police were forced to use tear gas and nightstick like batons  against the "godly Christian" crowd.  In addition, a gay man in Nice, France was savagely beaten and rendered unconscious (see photo below) and a literal death threat was made against the leader of the French Parliament. Joe My God has this on some of the violence:

At a Manif Pour Tous protest on Friday night, anti-gay activists battled French riot police who used tear gas and batons on some of the crowd. One of the protesters in the scuffle is reportedly a Catholic priest with the anti-semitic Society of St Pius X, who runs the church outside of which the melee occurred.

To date, not the first word of criticism or condemnation has been uttered by NOM.   One can only wonder what may be in store from the far right if the U.S. Supreme Court rules broadly on a constitutional right to gay marriage.  Remember, it is not the liberals - or socialists as the GOP likes to call us - are not the ones resorting to and advocating violence. 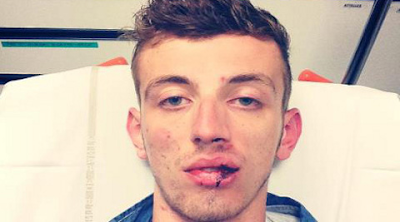