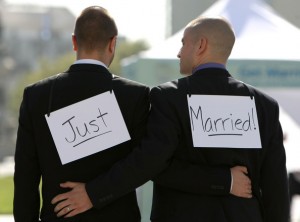 For the most part a majority of Republican legislators both at the state and federal level remain little better than tawdry whores when it comes to their pandering to the Christofascists and, to a lesser extent the white supremacists (who are anti-gay as well) in the GOP base.  Polls reflecting the views of a majority of citizens simply do not matter and time and time again these GOP elected officials vote against the party's long term best interests and continue to pander to the religious extremists and ignorance embracing Neanderthals of the party grassroots.  But, as noted before, some in the GOP want this self-prostitution to the Christofascists to end.  And some of these members of the GOP are major players when it comes to fundraising and they have decided to put their money where their mouth is when it comes to fighting for the soul of the GOP.  A piece in the New York Times looks at the American Unity Fund which is seeking to bankroll gay friendly Republicans.  Not surprisingly, hate group leader Tony Perkins is not a happy camper.  Here are some article excerpts:

When the Rhode Island State Senate tallied up the votes against a same-sex marriage bill passed there on Wednesday, something was missing: Republicans.

All five of the chamber’s Republican lawmakers had voted for the bill, stunning opponents and sending the measure to the governor’s desk and almost-certain victory next week.

The vote reflected not only the rapidly shifting tides of public opinion on same-sex marriage, but also the influence of a new Republican advocacy group called the American Unity Fund, which spent weeks helping the state’s gay rights organization cultivate Republican senators.

Now the group is preparing a major push in Washington and in state capitals intended to reshape the Republican Party, by building support for same-sex marriage and bolstering its acceptance among candidates and party activists around the country.

Founded and financed by some of the country’s leading Republican fund-raisers and strategists, the fund expects to raise up to $7 million this year, officials said. The fund’s organizers include Paul E. Singer and Clifford S. Asness, libertarian-leaning New York investors; David Herro, a prominent Chicago money manager; and Seth Klarman, a billionaire Boston philanthropist and hedge fund manager.


“The concept of gay unions fits very well within our framework of individual liberty and our belief that strong families make for a stronger society,” Mr. Singer said in an e-mail. “The institution of marriage is in very bad shape in this country, yet gay and lesbian couples want very much to be a part of it, to live as committed husbands and wives with their children in traditional family units. This should be what we want as conservatives, for people to cherish and respect this model and to want it for themselves.”

The fund is one of several advocacy organizations backed by wealthy Republicans and business leaders to shift their party’s stance in recent months on issues like immigration and same-sex marriage. And the new effort traces a rift between Republican elites and grass-roots voters over a handful of hot-button social issues that one group views as handcuffing the party and the other sees as essential to its identity.

[FRC's Tony] Perkins added: “They have money, but they’re small in number. It’s still a tension between those who care about social issues and those who would rather not deal with them.”


Those involved with the American Unity Fund said its initial efforts would be focused on more socially liberal states, like Illinois and Delaware, where a handful of Republican votes could enable advocates to win passage of same-sex marriage legislation in the coming months. The group has already set up shop in Minnesota, where the Legislature may vote as early as next week on a same-sex marriage bill that advocates do not yet have enough votes to pass.

But the group is also beginning a long-term push in more conservative states like West Virginia and Utah, seeking to build conservative support for nondiscrimination laws that could help pave the way for same-sex marriage in coming years.

Mr. Singer, the fund’s founder, helped bankroll the successful same-sex marriage push in New York two years ago, persuading Republicans in Albany that some of the party’s top donors would be there to help defend them against primary challenges and attacks from same-sex marriage opponents.


Tension over the issue broke into the open at the Republican National Committee meeting in Los Angeles this month, after a task force charged with assessing the party’s failures in the 2012 election recommended that officials rethink their language and approach to young voters, particularly on same-sex marriage.

People like Perkins and hate groups like FRC are going to be the long term death of the GOP.  One can only hope that Singer and his allies are successful in their efforts both to support pro-gay candidates but in also breaking the power of the Christofascists and ignorant elements of the GOP base.
Posted by Michael-in-Norfolk at Saturday, April 27, 2013