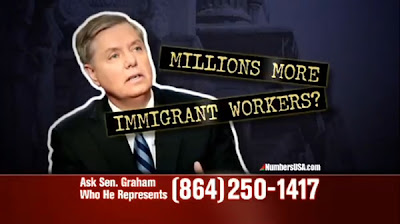 A prior post noted how the ever disgusting Palmetto Queen, Senator Lindsey Graham wanted suspected Boston bomber Dzhokhar Tsarnaev tried as an enemy combatant and tried before a military tribunal.   Never mind that doing so would violate federal law which prohibits American citizens from being tried by military tribunals.  Graham's principal concern in proposing a violation of federal law was most likely to pander to the knuckle dragging GOP base (see image above) in his home state where he will be up for reelection in 2014.  Sadly, such behavior is all too typical of the supposed leaders of today's GOP.  When in doubt, engage in demagoguery.  The law?  Well it just doesn't matter if ignoring it excites the foulest elements of the GOP base.  A piece in Think Progress looks at the GOP admission that it cannot do what would gain points with the white supremacists and immigrant haters of the party base.  Here are highlights:

On Friday, while the manhunt for suspected Boston bomber Dzhokhar Tsarnaev continued, Senator Lindsey Graham (R-SC) published a series of tweets suggesting that he wanted to revive the George W. Bush-era debates about whether terrorism suspects can be denied many constitutional rights and tried by a military tribunal. In a statement Graham released yesterday with Sen. John McCain (R-AZ), Sen. Kelly Ayotte (R-NH) and Rep. Pete King (R-NY), however, the four conservatives acknowledge that shunting Tsarnaev into a military commission is not a lawful opinion. Tsarnaev is an American, and federal law does not permit U.S. citizens to be tried under the military commissions system.

On CNN this morning, Graham articulated what now appears to be the conservative position on how Tsarnaev should be treated:


GRAHAM: This man, in my view, should be designated as a potential enemy combatant and we should be allowed to question him for intelligence gathering purposes to find out about future attacks and terrorist organizations that may exist that he has knowledge of, and that evidence cannot be used against him in trial. That evidence is used to protect us as a nation. Any time we question him about his guilt or innocence, he’s entitled to his Miranda rights and a lawyer, but we have the right under our law — I’ve been a military lawyer for 30 years — to gather intelligence from enemy combatants. And a citizen can be an enemy combatant.

Graham’s repeated insistence that Tsarnaev be treated as an “enemy combatant” remains concerning. In his statement with McCain, Ayotte and King, Graham claims that people like Tsarnaev can be “held as enemy combatants” — a view which suggests they could be held indefinitely even if they are not convicted by a court of law. Ultimately, however, the question of what would happen if Tsarnaev were not lawfully convicted by a civilian court is likely to be moot, as the evidence against him is very strong.

[T]here is a price if law enforcement or intelligence agents subject Tsarnaev to further interrogation without reading him his rights or permitting him to invoke his rights to remain silent or to have an attorney present. No information obtained in violation of Miranda can be used against Tsarnaev at his trial. Nevertheless, because the evidence against Tsarnaev is already so strong, even before he is questioned, it is likely that the FBI and CIA will be willing to pay this price in order to question this suspect without an attorney present.

I suspect that Graham accomplished his goal of satiating the extremists in the South Carolina GOP base.   Meanwhile, since I find Graham so whining and nasty in general, I could not resist this image I happened upon via MAD Magazine: 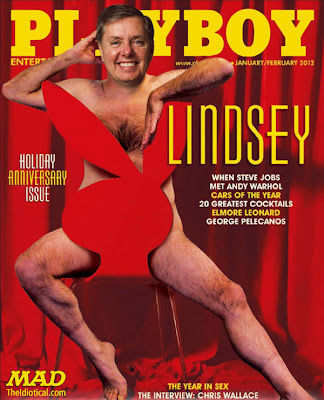