Could There Be Some GOP Support For ENDA? 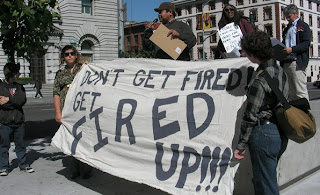 Other than gay marriage, few thing causes the Christofascists to foam at the mouth and proclaim that civilization is ending than the prospect of the enactment of the Employment Non-Discrimination Act which would bar discrimination in the workplace by employers with 15 or more employees.  The Christofascist opposition to ENDA is part and parcel with their overall agenda to keep LGBT Americans inferior under the civil laws so that the Christofascists can then point to such laws as a justification for their anti-gay hatred and bigotry.  Yes, it is sick, but that's the nature of most Christofascists.  Thus, with ENDA reintroduced into both houses of Congress, the question become whether or not some in the GOP - at least those who hope to save the future of the party - will run the risk of Christofascist wrath and vote for ENDA anyway.  A piece in Huffington Post suggests that some in the GOP may be ready to put the party's future ahead of prostituting themselves to the Christofascists and hate groups.  Here are some highlights:

Pointing to the dramatically-changed political climate on marriage equality and LGBT issues, Democratic Sen. Jeff Merkley (Ore.) said yesterday that he’s been having talks with key Republicans in the Senate about supporting the Employment Non-Discrimination Act (ENDA), which would ban discrimination based on sexual orientation and gender identity and which he reintroduced in the Senate on Thursday. Those conversations have included GOP Sen. Rob Portman (Ohio), who came out for marriage equality in March, announcing that he'd reversed his position two years after his son came out as gay.


“But I can tell you I’ve sat down with a number of Republicans who have not come out publicly yet. They’re still mulling over what they’re going to do, but I think there’s a very good chance they’re going to be supporting this bill. Whether that comes in a co-sponsorship or an affirmative vote when we are on the floor is yet to be seen. But I think that our numbers will be increasing both in sponsorship and in a floor vote than where we would have been had we had a floor vote even two years ago or four years ago.”

“In 1996, we came within one vote of getting employment non-discrimination passed,” Merkley continued, referring to the last Senate vote on the issue, in which ENDA was voted down, 49-50. “That was 17 years ago and the world’s changed quite a bit since then. This bill is way overdue.This is about equality under the law. This is about fundamental fairness. How can you possibly be a full member of society if you’re discriminated against in getting a job?”

Merkley acknowledged, however, that today, in a Senate in which the Republican minority uses the filibuster rule to try to stop just about every Democratic bill, 60 votes would be needed to pass ENDA.

“I feel with the bipartisan sponsorship out of the gate, I think we can get the 60 votes that will probably be required,” he sad in an interview on my SiriusXM radio program. “We have a good chance of getting it done. I think if we can put out a bipartisan bill out of the Senate, we have a chance in the House to move forward. I think that many of my Republican House colleagues who’ve stood in the way of this type of fight for fairness have realized they’re wrong, on the wrong side of history, on the wrong side of connecting with our younger folks.”

Merkley also continued to press President Obama to sign an executive order banning workplace discrimination against gay and transgender people among federal contractors. In February Merkley spearheaded a letter to the president, signed by 37 senators, calling on him to sign the order.

“This is something that can be done tomorrow,” Merkley said. “It would be a huge step forward. I’ve been encouraging the president and his team for several years to take such an action.