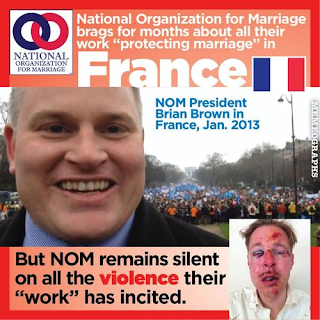 I have long argued that the Christofascists in America pose a clear and present danger to the rule of law and constitutional government.  For those who think this judgment is too extreme, I would point to the Christofascist led violence in France where increasingly anti-gay leaders and Catholic Church leaders are urging followers to break the law and where instances of undisguised homophobia are soaring.    As in this country, the French Christofascists are incensed that they are losing the ability to inflict their religious beliefs on the rest of society.   Here in America we have already seen signatories of the so-called Manhattan Declaration threaten to ignore the laws if gay rights advances and gay marriage come to fruition.  Personally, I hope these people are prosecuted to the fullest extent of the law possible.  It is far past time that it made made crystal clear that the Christofascists are not above the law - and that includes clerics who encourage violence.  Here are highlights from The Guardian on the problems in France:

A large American wartime poster proclaiming "We can do it" hangs behind the bar at Les Souffleurs, a fashionable bar in the Marais, the traditionally Jewish, but now gay, quarter of Paris.

The barman admits business is a little quiet for a Friday evening: the drinkers sitting on stools and chatting say they are concerned about the increasingly vocal and violent rise in homophobia in France, provoked by the bitter debate over same-sex marriage.

On Sunday the issue that has divided France will reach a potentially explosive peak as opponents of gay marriage take to the streets in a last-ditch attempt to stop the so-called "marriage for all" bill, which is expected to be approved by parliament finally on Tuesday. A demonstration by supporters of the right for homosexuals to marry and adopt children has also been planned.

Less than two weeks ago, in a spate of violence against gays, Dutch-born Wilfred de Bruijn was beaten up while walking arm in arm with his partner in Paris. De Bruijn posted a picture of his bruised and bloody face on Facebook, stating "it's the face of homophobia".

As an often ill-tempered debate in the national assembly came to an end last week, the violence was clearly escalating, with arrests at protests in the capital and other cities, and reports of attacks on gay bars.

The figurehead of the anti-gay marriage movement, the comedian Virginie Tellenne, who calls herself Frigide Barjot and who has described herself as "press attaché for Jesus", had earlier said: "If Hollande wants blood, he'll get it." She later retracted her comment, saying she had "gone too far".

Back in Les Souffleurs, Dorothée Jenny, a 26-year-old bisexual working in human resources, said she had been incensed at the homophobia at a recent anti-gay marriage march. "I do think about it at the moment, but I don't want to change my habits. Hopefully, when the law is passed, things will calm down," she said. Her twin brother Hyppolite, a webmaster, agreed. "I wouldn't kiss my boyfriend in the street these days," he said. The pair thought those opposed to gay marriage were also using the demonstrations to rail against Hollande. "I'm surprised at the popularity of the anti-gay campaign. These are young people we could be talking with."

The twins' friend, Estelle Luporsi, 24, a bank worker, spoke of a climate of fear. "There are certainly areas in Paris where you have to pay attention," she said.

Jean Soubeyre, a 43-year-old who works in marketing, said the legitimacy given to homophobia in the current climate was horrible. "The law will pass, but it's crystallising all sorts of other problems, such as the financial crisis."

Rol agreed that the law will pass. "Hollande knows he doesn't have a choice. If he renounces it, he will lose all credibility," he said. "For me, the [anti-gay marriage] protests just confirm that France is a rightwing country at heart."

It is far past time that Americans recognize the simple truth that conservative Christianists are not nice people and they have an open contempt for the civil rights of others and ultimately the U. S. Constitution itself.   These people are selfish, self-centered and motivated first and foremost by hate and bigotry.  They make a mockery of the true Gospel message.   That's one reason I no longer call them "Christian."  They are anything but Christian.