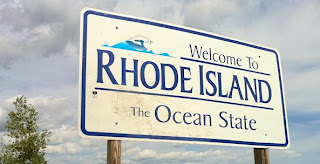 The gay haters and Christofascists at the National Organization for marriage have not had a good last week and a half.  Uruguay and France approved gay marriage despite the efforts of NOM allies and now Rhode Island has joined the ranks of American states granting full marriage rights to gay couples.  And the Rhode Island Senate vote occurred despite extreme efforts by NOM and the Roman Catholic Church to intimidate senators into voting against the bill.  Worse yet in the eyes of the NOM hate merchants, Delaware seems possibly poised to follow Rhode Island's example - e.g., the Delaware House passed a gay marriage bill today.   Think Progress looks at the developments in Rhode Island today.  Here are excerpts:


The Rhode Island Senate just voted 26-12 to approve marriage equality, guaranteeing that The Ocean State will be the 10th state to allow same-sex couples to legally marry. Because the Senate made some revisions to the bill, it still requires a final passage in the Rhode Island House, which will likely happen next Thursday. Back in January, it passed easily there by an overwhelming 51-19 vote. Gov. Lincoln Chafee (I) has promised to sign the bill.

During today’s discussion, only one amendment was advanced, which would have allowed a referendum on the question, and it was defeated by a 10-28 vote. A similar proposal failed in committee on Wednesday. Though numerous religious exemptions allowing discrimination watered down the civil unions bill passed in 2011, no such amendments were offered for this bill. Rhode Island Sen. Harold Metts (D) was one of the few Senators who spoke extensively in opposition to the bill, launching into a 12-minute religious condemnation of same-sex marriage. Sen. James Doyle (D), who just came out for marriage equality a month ago, countered that if he gets to Heaven and the Lord’s first concern is how he voted on same-sex marriage, then he’s “doing pretty good.” Sen. Maryellen Goodwin (D) notably changed her position to support the bill just before the vote, adding that she was voting on the side of love.

Not only will Rhode Island be the 10th state (plus the District of Columbia) to allow marriage equality, but with it, all of New England will now recognize same-sex couples’s marriages.

The trend line of history is clear.  The question is whether or not the justices of the U. S. Supreme Court will have the courage to embrace equality under the civil laws for ALL citizens.