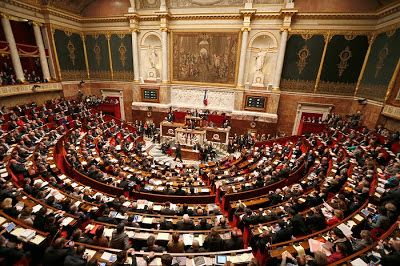 I am proud of the French Legislature which did not cave in to the threats and violence of the "godly Christian" crowd and elements of the far right.  Indeed, the measure was approved 331-225 in the National Assembly.  France brings the number of nations with full gay marriage to 14 and the United Kingdom is still poised to move forward on marriage equality later in the year.  Here in the USA, both Rhode Island and Delaware advanced marriage equality bills today.  It goes without saying that anti-gay hate groups in America are seriously unhappy with the vote in France and are trying to put on last ditch efforts to keep anti-gay discrimination alive in Rhode Island and Delaware.

Back in France, the response of the French allies of the National Organization for Marriage and far right Catholics were prompt to take to the streets and riot.  These people just cannot stand the reality is that the world is moving on and that their special right to oppress others are starting to fall.  Joe My Good looks at what the pious set and their far right extremist allies have been up to following the vote:

More violence broke out in Paris tonight following the final passage of same-sex marriage. Via the Associated Press:

Within hours, fiery clashes broke out between protesters and riot police. Legions of officers stayed late into the night, and a protest against the measure turned violent near the Invalides complex of museums and monuments. Protesters threw glass bottles, cans and metal bars at police, who responded with tear gas. Earlier in the day, there appeared to be more police than protesters outside the Parliament building on Paris' Left Bank, but that calculation soon shifted as night fell and thousands gathered to protest the bill. The protest dwindled to a few stalwarts shortly before midnight, when the violence began among a few hundred demonstrators including some who carried signs saying "Socialist dictatorship."

Some early reports claimed that protesters had hurled Molotov cocktails at the police, but the AP appears to have removed that word from their articles. This must be the youth movement that Brian Brown is so proud of.

Is the image below a sample of what we can expect from American Christofascists if the U. S. Supreme Court finds a constitutional right to gay marriage? 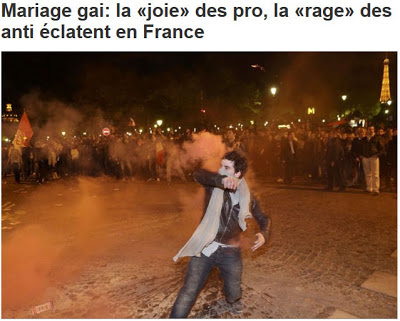