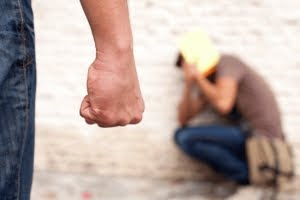 While protecting sexual predators and child rapists remains perfectly fine amongst senior members of the Catholic Church hierarchy, anti-bullying laws that might protect gays not to mention gay marriage are deemed would be threats to western civilization.  It is simple more evidence that few groups are more morally bankrupt than the bishops, archbishops, cardinals, and yes, Popes of the Catholic Church.  A piece in the Minneapolis Post looks at Church efforts to defeat proposed anti-bullying laws:.  Here are excerpts:

Calling it an extension of the push to legalize same-sex marriage in Minnesota, the Catholic Church is urging parishoners to call on lawmakers to reject an anti-bullying law.

According to a column in the Catholic Spirit, the official publication of the Archdiocese of St. Paul and Minneapolis, the proposed Safe Schools legislation is an “Orwellian nightmare” that would “usurp parental rights” and create “re-education camps.”

The column was written by Jason Adkins, executive director of the Minnesota Catholic Conference, which represents all Catholics dioceses in the state.

In addition to imposing burdensome legal mandates on parochial schools, the Roman Catholic Church also has argued in communications to parishioners that the law would unfairly discriminate against students who oppose same-sex marriage and other LGBT rights.

At 37 words long, Minnesota’s current anti-bullying statute is frequently described as one of the weakest in the nation. It doesn’t define bullying and harassment or require districts to track or report complaints or mandate efforts toward creating healthy school climates.

The proposed measure is based on the work of a task force appointed by Gov. Mark Dayton in the fall of 2011, after the GOP-dominated Legislature rejected efforts to strengthen the law. A wave of student suicides in the Anoka-Hennepin School District had drawn wide attention to the bullying issue.

The arguments raised by opponents of the Anoka-Hennepin settlement, most of them religious conservatives and proponents of conversion, or “pray away the gay” therapy, mirror those now being advanced by the archdiocese.  The Catholic Church has gone a step further, however, in linking the issue to same-sex marriage.

“The redefinition of marriage should not be seen as a stand-alone act,” the Catholic Spirit’s March column explained. “It is the harbinger of broader social change aimed at creating gender and sexual ‘freedom’ and breaking down the supposedly repressive social norm of heterosexual monogamy. And it is accompanied by other significant pieces of legislation working their way through Minnesota’s Legislature that should be resisted just as vigorously as same-sex ‘marriage.’”

Michael Bayly, director of Catholics for Marriage Equality,  is also the author of “Creating Safe Environments for LGBT Students: A Catholic Schools Perspective.” He disagrees with the archdiocese’s position, but said he understands it.  “I think they are frightened that their teaching on homosexuality is going to be seen as putting people in danger,” Bayly said. “And I think a good case can be made for that. They are in a bind.”

“The archdiocese has done nothing to sit down and problem-solve what would be best for kids,” Dibble concluded. “The truth is bullying is a problem we have to solve. It happens every day and it is a real problem.”

On the issue of gay marriage, the main source of hysteria among the bitter old queens in dresses, even more foul batshitery was on view in Rhode Island where Roman Catholic Bishop Thomas J. Tobin of the Diocese of Providence issued a screed aimed at intimidating the Rhode Island Senate which is poised to vote on a gay marriage bill.  Here are highlights from the Providence Journal:

"As the Rhode Island Senate prepares to take action on legislation that would seek to legitimize 'same-sex marriage,' I once again urge members of the Senate to stand strong in resisting this immoral and unnecessary proposition and to defend marriage and family as traditionally defined. We should be very clear about this: it is only with grave risk to our spiritual well-being and the common good of our society that we dare to redefine what God himself has created. My prayer is that the senators will have all the wisdom and courage they need to do the right thing in this moment of decision."

Tellingly, while the Catholic Church was bashing gays and gay marriage, the Providence Chamber of Commerce's board chairman and two other business leaders said Monday legalizing same-sex marriage would remove one hurdle that makes it hard for R.I. businesses to compete.  And let's be candid about something.  God did not create marriage as we know it.  Its a much evolved institution - e.g., women are no longer deemed chattel property -  but still has much of its focus on property rights and controlling women and offspring.  It is a man made institution first and foremost and the Church got involved merely to increase its power and control over believers and non-believers alike.