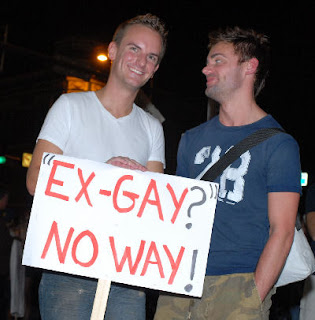 First it was California (where the Christofascists are challenging the now enacted law  law), then it was New Jersey where legislation is pending, and now New York State where a bill has been introduced in the New York Senate that would shut down the use of fraudulent "ex-gay" therapy on minors.  No doubt the Christofascists and charlatans of the "ex-gay" ministries will be screeching and shrieking that there "religious liberty" is being threatened.   But the truth is that laws exist that bar parents from inflicting harm on their children based on false religious beliefs - e.g., court ordered blood transfusion over parental objections, etc.  "Ex-gay" or conversion or reparative therapy id no different and needs to be banned.  Here are highlights from a piece in Huffington Post:

The fight against a controversial therapy that purports to "cure" gay people of their gayness and make them straight has come to New York.

The therapy has been around for decades, but has come under increased scrutiny in the last few years as gay rights supporters have argued it doesn't work and may cause great harm to those who undergo it. Over the past several years, the entire mainstream mental health community has renounced it, and politicians in several states have taken steps to restrict it.

New York's legislation, which will be introduced on Friday, is modeled after a new California law that bans licensed therapists from using the practice, sometimes called conversion therapy or sexual orientation change efforts, on minors. California's bill, the first of its kind, was signed into law last fall and is currently on hold while a federal appeals court considers two lawsuits alleging an unconstitutional violation of free speech and parental rights.

Glick's interest in the ban grew out of her work with lesbian, gay, bisexual and transgender youth, who make up more than 40 percent of the young homeless population in America. "You start to hear the same stories over and over again," she told The Huffington Post on Thursday. "'They tried to make me straight and they took me to ...,' or, 'I couldn't become -- and so they threw me out,'" she continued, listing some of the issues she has encountered in her work with this population.

Opponents of the California law have argued that it attacks free speech, unconstitutionally regulates what therapists and patients can say to each other, and infringes on parents' authority to seek whatever type of professional help they choose for their children.

"If you really want to educate the public about the risks of these treatments, the fact that there are states that have outlawed these treatments should be a chilling fact," said Dr. Jack Drescher, a New York City based psychiatrist known for his work on sexual orientation and gender identity.

Drescher is a member of the the American Psychiatric Association, a professional group that has joined other major professional health associations in America in concluding that these therapy efforts have never been proven to work and may harm young patients.

"Its symbolic of the overall debate, and what underlies the belief of those who support this kind of therapy is that there is something wrong with being gay or lesbian," Gianaris said on Thursday. Gianaris said he was moved to introduce the legislation after he read about the bill in California, and saw an opportunity for New York to take the lead.

"We're in the middle of a great cultural battle over sexual orientation right now," Gianaris continued. "And it's important that as we're securing victories in the marriage fights that we don't let attacks on our gay and lesbian youth occur in other forms."

Children are not the property of parents and just because parents suffer from religious based delusions and prejudices should not mean that they are free to subject their children to what in my view amounts to criminal child abuse.   Many fraudulent and deceptive practices are outlawed and conversion therapy needs to be added to that list of prohibited practices.  The shrieks of the Christofascists is really based on their knowledge that once the public becomes convinced that sexual orient cannot be changed as claimed, then the Christofascists will have lost their war against LGBT individuals.