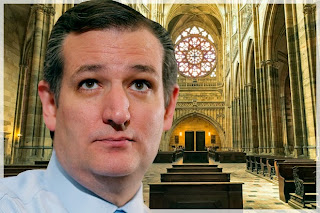 I note often that Christian fundamentalists pose a clear and present danger to constitutional government in America.  The dangers range from Mike Huckabee who has said on national television in the past that he'd like to scrap the U.S. Constitution and replace it with the Bible - his version of the Bible, of course - to the raving lunatics at Liberty University and Regent University who want to craft special rights for Christian extremists and trample on the civil rights of other Americans.  Of these later supposed institutions of higher education (both sadly located in Virginia), Liberty wins hands down on nuttiness and insanity.  A piece in Salon looks at the dangers these extremists pose.  Here are highlights:

A lawyer and an associate dean at Liberty University, a columnist for Glenn Beck’s The Blaze, and the founder of WND’s Christian fundamentalist site Barbwire.com, Matt Barber might seem like an evangelical fringe character, but, clearly, he means to have his voice heard and his pronouncements taken seriously: his work appears under the portentous slogan RELATIVISTS BEWARE: TRUTH TOLD HERE.

Yet he is affiliated with Glenn Beck, so, in pursuit of Truth-Telling, he sees fit to publish such essays as “You Won’t Believe What the Devil Said to Me!” and “Sympathy for the Devil” — a Means to Destruction," in which the authors, in complete earnestness, write of a horned-and-dangerous Beelzebub as an existent being looming over their daily lives.

Christianity, that multilevered vehicle for the dissemination of “blind and naked ignorance,” has warped the minds of a majority of Americans, and Barber’s blog reflects (sadly) mainstream religious convictions.

[W]e have to take Barber seriously, precisely because we would be inclined to disregard him as deeply un-serious, and thereby fail to appreciate the increasing threat that Christianity poses to our Constitutionally godless Republic.  The latest reification of this faith-based menace: the proliferating “religious freedom restoration acts.”

Both RFRAs and restrictions on abortions are the products, largely, of evangelicals whose names should go down in infamy, but who, like Barber, at least out in the red states, bask in the light of benevolence as “people of faith.”

All those who, in the public arena, advance Christianity’s bizarre supernatural propositions about our world and our origins, and worse, use them to justify legislation, should expect relentless demands for evidence from rationalists.  . . . . Verse and chapter cited from a potentially unreliable translation of a supposedly holy book composed millennia ago by unknown humans cannot pass as “proof.”

Derangement is clearly rampant across large swathes of America.  Citizens of one of the most technologically advanced nations on earth who opt, of their own volition, to believe in a magic book negated by science and peppered with all manner of bilious behests and misanthropic myths cannot be esteemed to be thinking sanely.

Barber’s blog is but a symptom of the seemingly incurable malady of faith.  In fact there is a remedy — free speech, applied liberally to infected areas.  Rationalists must resist all calls to show respect for religion, be it Christianity or Islam or any other faith with universalist pretensions.

In the United States the winds of reason are blowing more strongly than ever: since 2012 alone, 7.5 million have abandoned religion.  . . . Those sleeping the slumber of faith hang DO NOT DISTURB signs about their minds.  No rationalist should feel obliged to comply.