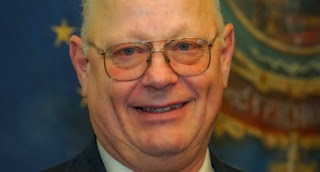 As I have asked before, why is it that for every sex scandal involving a Democrat, it seems as if there are ten to twenty involving Republicans.  Why is it that the members of the party of "family values" seem to find it nearly impossible to avoid sexual peccadilloes?  The latest example comes from Vermont where Vermont GOP  state senator, Norman McAllister, apparently allowed tenants behind in their rent to make up for rent delinquencies by offering sex acts.  The Raw Story looks at the sorid details.  Here are highlights:

A conservative lawmaker in Vermont was arrested for sexual assault, human trafficking, and other charges. The Vermont state senator, Norman McAllister, was scheduled to be arraigned on Friday at the Vermont Superior Court in St. Albans, the Burlington Free Press reports.

Police arrested McAllister, 63, of Highgate on Thursday evening after he spent the day at the Statehouse working on legislative issues. Allegations against McAllister include “that he either accepted or solicited sex from two women in exchange for overdue rent,” writes the Free Press.

McAllister made his money in dairy farming. He has advocated imposing mandatory drug testing on people who receive government benefits.

“We want to take care of our people, but we also don’t want to support a habit,” McAllister told WPTZ on his March of his championing of random drug testing for poor people in Vermont.

Hypocrisy seems to be a main attribute of today's Republicans.