What Evangelical Christians Can Learn from Gay Rights Wins 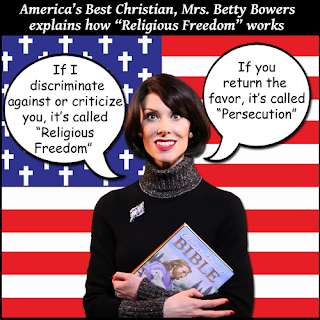 As noted in a post yesterday, a new poll shows that more Americans say they would be with a gay presidential candidate than they would with one who is an evangelical Christian.   The evangelical crowd is truly killing the Christian brand and fueling the rise f the so-called "Nones" who have completely walked away from organized religion and for good reasons.  The family values crowd has made being an evangelical Christian synonymous with being hate filled, bigoted, most likely racist, and demanding of special rights while trampling on the rights of everyone else.   In the minds of more and more Americans, evangelical Christians simply are not nice and decent people (an accurate view, in my view).  A piece in The Daily Beast looks at the decline of the Christian brand and argues that these people could learn from the success of the gay rights movement, something like to be anathema to them.  Here are highlights:

[T]he Christian right still wields considerable political power in this country. But outside the realm of the Republican presidential primary process—and maybe soon within it—the religious right is losing wattage fast, and I can report to you happily that the movement has only itself to blame.

Here’s a fascinating little politico-cultural data point that may have blown past you this week and would have me were it not for Rod Dreher at The American Conservative: A new Wall Street Journal/NBC poll shows that more Americans say they feel enthusiastic about or comfortable with an openly gay or lesbian presidential candidate than an openly evangelical Christian one. Yep. Three out of five, or 61 percent, said they’d welcome a gay candidate, while just 52 percent would say the same of an evangelical.

The comparison is instructive, because if you contrast these two movements and their relative political success in recent years, you see a very clear distinction that should (and does) make Republicans nervous. You see why the LGBT movement is winning and why religious conservatives are losing—and further, why evangelicals, the foot soldiers of the religious right, probably can’t do anything about it without in effect ceasing to be evangelicals (at least of the stripe they’ve been for 30-plus years).

[A] very long story very short, but in essence, over time, the leaders of the [gay rights] movement saw that it was more important to persuade public opinion than to shock it. And so the public-relations strategy around the movement for same-sex marriage became “we’re just like you.” And it worked, in all the ways you already know about.

In other words, the LGBT movement figured out that it had to find a way to get people who didn’t agree to agree.

Now let’s look at the Christian right. Has it done anything over the years to change its approach, try to widen its reach? Basically, no. Evangelicals care about the issues they’ve cared about for three decades.

Lately, the big issue for Christian conservatives is religious freedom. Are they winning that one? No. Public opinion is divided . . . . But many polls, like this one by Reuters, find that majorities oppose even a private employers’ “right” to deny contraceptive coverage to women.  Americans are against the religious right, too, on state laws like the one Governor Mike Pence originally tried to pass in Indiana, and which evangelical conservatives are pushing elsewhere.

What is the religious right’s version of “we’re just like you”? I don’t think there is one. Because they are not like the rest of us, at least when it comes to politics. The rest of us are a bunch of different things (many quite religious). But we, motley as we are, believe in separation of church and state and the principle that as far as public life goes, the Constitution quite effortlessly trumps the Bible. And those among this larger “we” who are religious think religion demands chiefly that we behave compassionately toward the less fortunate, not that we refuse to bake cakes for matrimonially minded lesbians.

At long last, the real moral majority is winning.

As I have stated many times, I look forward to the day when evangelical Christians are a detested and scorned minority unwelcome in polite society.  They have ruined the lives of others for years and years, and it is far past time that they reap the treatment they have inflicted on others.
Posted by Michael-in-Norfolk at Friday, May 08, 2015