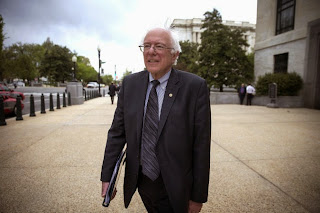 With the paranoid and ego filled Ben Carson announcing his candidacy for the presidency yesterday the contrasts with Bernie Sanders will be even greater as the campaign season rolls along.  Neither man is likely to win, but the entertainment factor should be off the charts.  Yes, Sanders will put progressive pressure on Hillary Clinton, but he is also likely to throw many a hand grenade at some of the GOP's most sacred cows and spotlight its bigotry.  A piece in Salon looks at how Sanders could shake up the presidential race along the way and revive progressive politics.  Here are excerpts:

Bernie Sanders is running for president. And you can look at that a few different ways. The cynical take is that this is theatrical, a pretense to grant the appearance of a primary campaign without challenging the expected outcome of a Hillary Clinton nomination. But Sanders certainly doesn’t think of it that way, having raised over $2 million in the first 48 hours since his announcement.

The way I look at the Sanders campaign is through the lens of another campaign: the fight to raise the minimum wage. When that battle was left to Washington, it floundered. But outside agitation unified the Democratic Party over the past week around a true living wage, forcing politicians beyond where they felt comfortable. The story reveals the power of activism based on principle, and a Sanders campaign can serve as a conduit for this kind of work.

The minimum wage started in 1938 at one quarter an hour, rising incrementally through the 1960s. But the apex in terms of purchasing power for the minimum wage was actually 1968. If you adjust for inflation, the minimum wage is lower today, at $7.25 an hour, than what it was more than 45 years ago.

[O]ut of the ashes of the Occupy movement, low-wage employees started to organize in their communities and workplaces. First there was the OUR Walmart campaign, which started with 100 Wal-Mart employees demanding a meeting with top executives in 2011. The next year, OUR Walmart members protested on Black Friday, the most high-profile retail sales day of the year. This matured into a coordinated movement, bringing in fast-food and other retail franchises and engaging in regular wildcat strikes and actions.

Slowly, that moved decision makers in Washington and the executive boardroom. By the end of 2013, the president endorsed a $10.10 minimum wage proposal that had been put out by Democrats in Congress. This brought states on board, with Connecticut passing the $10.10 wage floor in March 2014, and Hawaii, Maryland and California following suit. Vermont will have $10.50 and Massachusetts will have $11 when their wage floors phase in over the next few years. Ballot measures in four conservative states (Arkansas, Nebraska, Alaska and South Dakota) passed even amid Republican successes in 2014. Twenty-nine states and the District of Columbia now have minimum wages above the federal level.

Perhaps more important than any of this, in February Wal-Mart announced that it would increase its minimum wage to $9 an hour this year and $10 an hour by next year. Because of its dominance in the low-wage marketplace as the nation’s largest employer, the Wal-Mart announcement has effectively increased the wage floor, with other companies scrambling to meet its wages.

You create a constituency where one didn’t previously exist. And that’s precisely the promise of a Sanders presidential campaign. If his issues are popular – and every indication in the polling is that things like a higher minimum wage and more equality of income are – and he can build the same kind of grass-roots movement that ignited the fight for $15, then it challenges not just Hillary Clinton but everyone who wants to lead within the party to recalibrate and come closer to his ideals.

Sanders doesn’t have to win to achieve success. The potential here is to build an organizing apparatus for the ideas, to construct a coalition that supports a generous social safety net, progressive taxation and protection for labor. The Democratic Party once reflected some of that, but has drifted. Only a broad base from the streets can drag them back to that New Deal/Great Society position again, or at least make them afraid enough to toe the line. And it can.