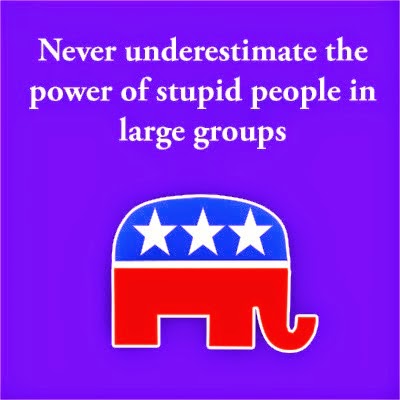 In what is in some ways a logical progression - assuming that the word logic and Christofascist are not a complete oxymoron - a woman in Nebraska who describes herself as "an ambassador for God and his son, Jesus Christ"  has filed suit in U.S. District Court seeking a ruling that all gays are sinners and an abomination and that "God is not a liar."  (She sounds perfect for the position of campaign director for Ted Cruz or Mike Huckabee doesn't she?).  It goes without saying that the woman, Sylvia Driskell, age 66, is not represented by counsel.    But her insane action demonstrates just how extreme and untethered from reality the "godly Christian" crowd/GOP base has become.  The Omaha World Herald looks at the insanity (it would be hard to make up stuff this crazy if one tried).  Here are highlights:


An Auburn woman claiming to be an ambassador for God and his son, Jesus Christ, is suing all homosexuals.

Sylvia Driskell, 66, asked an Omaha federal judge to decide whether homosexuality is a sin.

Citing Bible verses, Driskell contends “that homosexuality is a sin and that they the homosexuals know it is a sin to live a life of homosexuality. Why else would they have been hiding in the closet(?)”

Driskell wrote in a seven-page petition to the court that God has said homosexuality is an abomination. She challenged the court to not call God a liar.

“I never thought that I would see a day in which our great nation or our own great state of Nebraska would become so compliant to the complicity of some people(’s) lewd behavior.”


Driskell could not be reached by phone. She is representing herself in the lawsuit.

I truly ponder how individuals like Ms. Driskell have become this mentally unhinged.   That said, two things spring to mind: (i) this is the type of person that folks to today's Republican Party and (ii) her pastor/priest is probably applauding her insanity.  A third things also comes to mind: religious belief/affiliation is a choice while sexual orientation is not.

Email ThisBlogThis!Share to TwitterShare to FacebookShare to Pinterest
Labels: anti-gay animus, decline of the GOP, federal courts, GOP Base, Nebraska, religious based insanity

You just can't make this stuff up.
What a horrible excuse for a human being. It must be miserable to be that filled with hate.