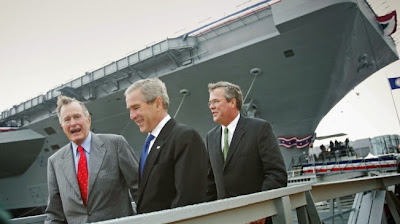 Republicans and pundits who are in denial - or who are downing gallons of "Kool-Aid" - try to pretend that Jeb Bush - Jebbie on this blog - is a "moderate.  Jebbie, of course, seeks to fan this myth and disingenuously claims that he is "his own man." .  But on occasion Jebbie slips up and makes statements that let the real truth shine out.  A case in point?  Statements Jebbie made to a group of New York financiers on Tuesday when he admitted that on Middle East policy, he turns to his older brother and former President George W. Bush.  The same George W. Bush who told lies to take America to war in Iraq, who ignored warnings of an attack in the weeks before 9-11, and bankrupted the country and squandered away the budget surplus achieved under Bill Clinton's presidency.  This admission ought to totally disqualify Jebbie for any office - even dog catcher.  Talking Points Memo looks at this frightening admission.  Here are highlights:

Likely presidential candidate and former Florida Gov. Jeb Bush (R) told a group of New York financiers on Tuesday that when it comes to Middle East policy, he turns to his older brother and former President George W. Bush, according to the Washington Post.

“If you want to know who I listen to for advice, it’s him,” Jeb Bush said, the Post reported, citing four anonymous attendees of the meeting.

The event was a closed-door affair, reportedly organized by hedge fund manager and Republican Party mega-donor Paul Singer. The paper noted that it was not a fundraiser.

A Bush spokesperson addressed the comment to the Post.  “Governor Bush has said before that his brother is the greatest ally to Israel in presidential history, he admires his stalwart support for our ally, and that is in line with his commitment to standing with Israel in the face of great threats to their security and our own,” the spokesperson said on Thursday.

Last month, George W. Bush reportedly said he would be staying out of the spotlight should his brother run for President.

But a few days later, George W. Bush knocked President Obama's Middle East policy at an event hosted by another mega donor, Sheldon Adelson — particularly the ongoing nuclear negotiations with Iran and Obama's handling of the Islamic State group in Iraq. His remarks were leaked by Bloomberg News.

George W. Bush was wrong on virtually every aspect of America's Middle East policy.  If Jebbie is turning to his idiot brother for advise, sane and rational people should be running screaming from Jebbie's unannounced presidential campaign.
Posted by Michael-in-Norfolk at Thursday, May 07, 2015