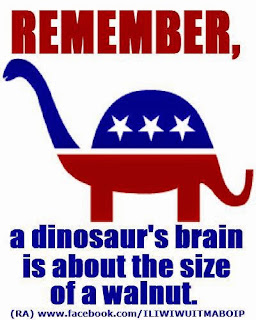 The husband and I attended a fundraiser for Hampton Roads Pride  last night in Virginia Beach where I had an opportunity to talk with that city's Republican mayor who complained that the Republican Party "just did not get it" on the issue of gay rights and that he wished the party would come around to reality.  The mayor's comments were but one example of the GOP's branding problems as it begins the run up to the 2016 elections.  On a host of issues, the GOP is out of synch with where modern America is headed and at times it seems that the GOP goes out of its way to alienate everyone other than spittle flecked, ranting evangelical Christians and open white supremacists.  A column in the Washington Post looks at the GOP's problem:

If Republicans are baffled by Hillary Clinton’s persistent lead in the polls despite months of bad publicity, they need only examine the tensions on display in their party over the past few days.

It would be hard to conceive of a worse stretch for Clinton than a period that began with scrutiny of her use of a private e-mail server while she was secretary of state and moved to saturation coverage of the Clinton Foundation’s fundraising.


Nonetheless, there was the Wall Street Journal/NBC News poll released Monday, showing Clinton ahead of both Jeb Bush and Marco Rubio by six points, Scott Walker by 10 and Rand Paul by three.

The New York Times/CBS News poll, released a day later, showed what the GOP is up against: Only 29 percent of Americans had a favorable view of the Republican Party, while 43 percent had a positive view of the Democrats.

Republicans and conservatives have a brand problem. Their presidential campaign will only aggravate it as candidates are forced to double-down on an ideology that is in danger of decline. Moreover, the next year is likely to intensify deep stresses inside their coalition.

If Democrats have a problem with white working-class voters, Huckabee brought home how Republicans have challenges of their own. While the GOP’s candidates fall all over themselves to cater to ultra-rich donors whose taxes the Republican hopefuls promise to cut, the party’s rank-and-file have reason to wonder what’s in all this for them.


The big-money groups, starting with Club for Growth Action, went to work immediately to knock Huckabee aside. Raising the class contradictions inside the GOP coalition — as both Rick Santorum and Newt Gingrich did with Mitt Romney — is the last thing the party’s billionaire caucus wants.

Republicans typically try to keep their working-class voters onside by appealing to them on social issues and immigration. That’s why Clinton’s sideswipe at the Republican field on the immigration issue was a sophisticated form of wedge politics.

Her goal was to put pressure especially on Rubio and Bush. They hope to shore up the GOP share among Latino voters, who went 71 percent for President Obama in 2012. But both are in a box because, while 57 percent of all Americans favored a path to citizenship in the latest Times/CBS poll, only 38 percent of Republicans did.

Republicans hope that if they can just stir up enough doubts about Clinton, one of their candidates will make it through in 2016. Perhaps this can work. But their anti-Clinton focus will do little to resolve the underlying weaknesses of an ideology and a party that, even against a 67-year-old Democrat, do not look like the wave of the future.