Quarantines for AIDS Victims: The Mike Huckabee You May Not Remember 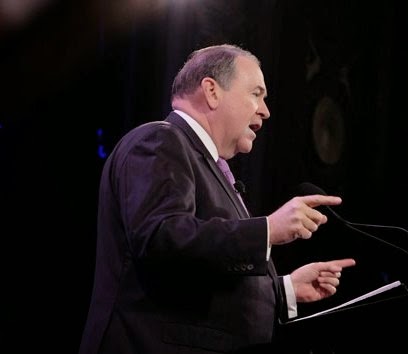 Yesterday one of the foulest of GOP presidential candidates formally announced his candidacy: Mike Huckabee.  While he tried to come off as folksy and concerned about average Americans, he had total amnesia as to how those same Americans have come to find themselves in financial straits: failed GOP policies, George W. Bush/Dick Cheney's unfunded wars, and unfettered Wall Street greed that the GOP endorsed.  Huckabee - at least from the portions of his speech that I heard - tried to stay away from "social issues" but it is important to remember that his views have not changed and that he has not "evolved" whatsoever.  A piece in Mother Jones reminds us what Huckabee is really all about.  Here are highlights:

Mike Huckabee . . . . . launched his second bid for the White House in his hometown of Hope, Arkansas, vowing to stop the "slaughter" of abortion and calling for the protection of the "laws of nature" from the "the false God of judicial supremacy."

Huckabee is joining a GOP field that's bigger and more competitive than the one he out-hustled to win the Iowa caucuses seven years ago. The Christian conservatives who flocked to the former Baptist preacher in 2008 can now turn toward other evangelical-minded candidates in the GOP presidential race.

Since dropping out of the 2008 race, he's flaunted a more combative, occasionally conspiratorial brand of politics—flirting with birtherism, advising prospective enlistees to avoid joining the armed forces until President Barack Obama has left office, and, just last month, warning social conservatives that the United States is "moving rapidly toward the criminalization of Christianity."

Huckabee is staying true to the kinds of red-meat issues he first entered politics to promote, in a long-shot 1992 bid for Senate against Democratic incumbent Dale Bumpers.

Huckabee, then a Baptist pastor who operated a small television station out of his Arkadelphia church, made sex and morality the centerpieces of his '92 campaign—and he preached as fiery a message from the stump as he did from the pulpit. The novice politician let loose with eyebrow-raising tirades that occasionally put him to the right of the most fire-breathing conservatives. He endorsed quarantining AIDS patients, condemned efforts to shield homosexuals from discrimination, and called for the death penalty to be imposed on big-time drug dealers.

He endorsed quarantining AIDS patients from the rest of society—a radical view even among conservatives at the time—while arguing that the severity of the epidemic had been exaggerated because gay people wielded so much political clout. The federal government should spend less money on AIDS, he insisted, and more on diseases that the afflicted had not brought on themselves, such as cancer.

He attacked his opponent for supporting the Americans with Disabilities Act (because it included protections for AIDS patients) and a 1991 civil rights bill that would have prohibited housing discrimination based on sexual orientation.

According to Huckabee, being gay wasn't just a sin—it should be a criminal offense. . . .
calling for enforcement of state sodomy laws," which made gay sex a felony "crime against nature" in many states.

"I think he's the same guy who started out," says Max Brantley, editor of the Arkansas Times, who covered the 1992 race. "He's got a penchant for sort of cheap-shot quips. He thinks a lot of himself. He thinks he can talk himself out of anything. The main thing I still marvel at is how many people think he's a nice guy, because he's got a real mean streak."

But at this point, after spending the years since the 2008 election feeding red meat to his base, the tapes may not even matter much. In just the last six months, he's urged states to ignore a possible Supreme Court ruling on same-sex marriage and attacked Jay-Z for "arguably  crossing the line from husband to pimp by exploiting his wife [Beyonce] as a sex object." Researchers won't have to scour church basements for dusty VHS cassettes containing his stem-winding sermons. They can just turn on the television.

The man was and remains an extremist.  One can only hope that the mainstream media will get off its lazy ass and expose Huckabee for the foul individual that he is.