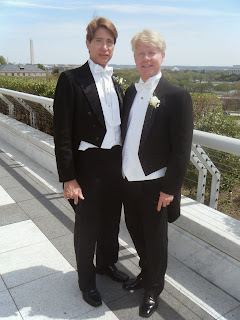 In more bad news for the Republican Party, a new NBC News/ Wall Street Journal poll has found that 58% of Americans want the U.S. Supreme Court to strike down state same sex marriage bans nationwide.  Meanwhile, would be GOP presidential contenders are fighting to see which of them can be the most anti-gay and strident in their opposition to marriage equability.  It is indicative of the GOP's branding problem and refusal to accept that the world and society are changing and that trying to drag the country back to the 1950's is a recipe for failure.  Here are highlights from NBC News on the poll findings:

Nearly three in five Americans want to see the Supreme Court legalize gay marriage throughout the United States, according to a new NBC News/ Wall Street Journal poll.
A total of 58 percent of Americans said that they favor a high court decision to eliminate bans against same sex marriage, with 44 percent of those saying they strongly favor such a result. Thirty-seven percent of respondents said they oppose a court ruling in favor of the case's LGBT plaintiffs, with 29 percent said they strongly oppose it.

In short, the GOP is alienating younger voters, Hispanics and those who are educated and appealing largely to a demographic that is literally dying off.  Not exactly a formula for long term success.