Jeb Bush to Prostitute Himself at Liberty University 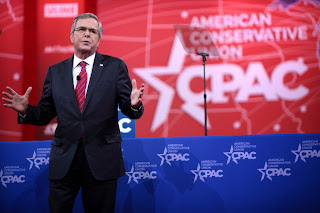 I have always felt that if a politician will resort to any despicable pandering and self-prostitution to get elected, they most likely will not be trustworthy in office if elected.  A case in point? Jeb "Jebbie" Bush who, in addition to relying on his cretin like older brother for Middle East policy advice, is going to prostitute himself to the Christofascists by speaking at this year's commencement ceremonies at Liberty University, a blight on the reputation of Virginia and higher education in general.  Jebbie so wants to win the Christofascists over that he will speak at a university - and I use that term loosely - where religious ideology trumps logic, reason and science.  A tawdry whore has more integrity than Jebbie.  A piece in the Washington Post looks at Jeb Bush's willing self-prostitution.  Here are excerpts:


Jeb Bush, not yet an official candidate for president, will make what has become an essential campaign stop for Republicans seeking the White House when he speaks at Liberty University on Saturday.

Of the dozen or so declared or likely GOP presidential contenders, Bush might seem the most out of place on the conservative campus in the foothills of Virginia’s Blue Ridge Mountains. Despite his conversion to Catholicism and opposition to abortion, Bush is viewed warily by his party’s right flank for his relatively moderate views on immigration and Common Core educational standards and for his failure to take as hard a line in his opposition to same-sex marriage as some of the rest of the GOP field.

Bush has a long way to go to win over some religious conservatives. Some were particularly irked by his reaction in January, when Florida began allowing same-sex marriages. Bush issued a statement that reiterated his support for religious liberty but also urged respect for “the rule of law” and for “couples making lifetime commitments to each other.”

In his speech, Bush is expected to praise the power of Christianity in action.  “Today, by the thousands, Liberty is sending forth across America civilized, confident, true-hearted men and women — which happens to be just what America needs,” Bush will say, according to excerpts of his prepared remarks provided Friday by Bush’s Right to Rise PAC.

Bush’s scheduled visit to Liberty is a more overt effort to win the Christian right. It comes less than two months after Sen. Ted Cruz (R-Texas) chose the campus to announce his own bid for the presidency — and at the end of a week that saw the Republican field swell by three.

Many of those are expected to find their way to Liberty, whose thrice-weekly convocation speeches — mandatory for the nearly 14,000 on-campus students — guarantee an impressive crowd.   “Several of them are figuring out right now, when is their Liberty appearance?” said Victoria Cobb, president of the Family Foundation of Virginia.

Note the quote of the always evil Victoria Cobb, president of Virginia's leading hate group, The Family Foundation, which is the circus master of the Virginia GOP.