Palmetto Queen: GOP Is Getting Creamed By Non-White Voters' 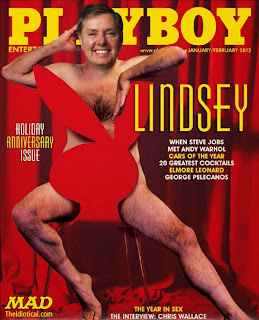 As yet undeclared Republican presidential candidate - and closeted gay - Lindsey Graham, a/k/a the Palmetto Queen, today decried the GOP's inability to attract non-white voters and predicted that the GOP would lose the 2016 presidential election absent serious immigration reform.  Immigration reform, of course, is anathema to the Christofascists/white supremacists who control the base of the Republican Party.  A piece in The Hill looks at the Palmetto Queen's plaintive Cassandra act.  Here are highlights:

“The only way we lose this election is if we beat ourselves and that is very possible, but we are getting creamed with non-white voters,” Graham, a likely 2016 presidential contender, told host Susan Page on USA Today’s “Capital Download.”

“We’ll lose,” he said, if the party doesn't improve its prospects with minorities.

“You’ll never convince me ... it’s not because of the immigration debate,” said Graham.
Graham said he was “98.6 percent sure” he would seek the Oval Office next year. If he does, the South Carolina lawmaker has made up his mind on immigration reform.

“If I were the president of the United States, I would veto any bill that did not have a pathway to citizenship,” Graham said.

“You would have a long, hard path to citizenship... but I want to create that path because I don’t like the idea of millions of people living in America for the rest of their lives being the hired help,” he added. “That’s not who we are.”

Graham also lashed out at Republicans who believe a secure border is necessary before tackling citizenship for illegal immigrants.

“That’s not practical,” Graham said of addressing the border before amnesty.

“She’s doing a listening tour from North Korea,” he joked of Clinton’s media availability. “There’s more access to him than I think there is to her."

Graham touted his own credentials for the White House.

It goes without saying that the Palmetto Queen's message on immigration reform will not be well received by the GOP base.  Meanwhile, if he runs for the presidency, I hope Graham gets outed.
Posted by Michael-in-Norfolk at Friday, May 08, 2015