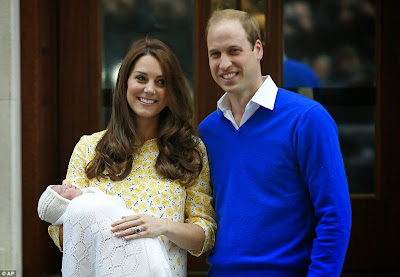 As countless British news outlets are reporting as are royalty obsessed American news sites, Prince William and his wife, Katherine, Duchess of Cambridge have selected a name for the new royal princess born over the weekend.  The name selected is  Charlotte Elizabeth Diana.  The Daily Mail has these details:

The Princess of Cambridge has finally been revealed to the world as Charlotte Elizabeth Diana - in a touching nod to her grandfather, her grandmother and her great-grandmother.

The Duke of Cambridge was determined to pay tribute to his mother – despite the efforts of some palace courtiers to have Diana airbrushed from royal history.

William was, however, clear that his baby girl should not have Diana as a first name. ‘It would have been a millstone around her neck,’ said one of the princess’s long-time friends.

Within minutes of the name being announced this afternoon, Diana's closest friend Rosa Monckton said: 'Diana's spirit lives on in her sons, and now her name lives on in her granddaughter #CharlotteElizabethDiana'.

As a history geek, I find it interesting but perhaps understandable why an effort was made to link the name Charlotte as the feminine version of Charles.  There have been Charlottes in Great Britain's past, perhaps most notably the wife of King George III - not the most popular of monarchs in America.  Indeed, Queen Charlotte is whom Charlottesville, Virginia - home of my alma mater - is named.  Wikipedia has this:

Charlotte of Mecklenburg-Strelitz (Sophia Charlotte; 19 May 1744 – 17 November 1818) was the wife of King George III. She was Queen of Great Britain and Ireland from their marriage in 1761 until the union of the two kingdoms in 1801, after which she was Queen of the United Kingdom of Great Britain and Ireland until her death in 1818. She was also the Electress of Hanover in the Holy Roman Empire until the promotion of her husband to King of Hanover on 12 October 1814, after which she was also queen consort of Hanover.

Charlotte, North Carolina is also named after Queen Charlotte.
Posted by Michael-in-Norfolk at Monday, May 04, 2015