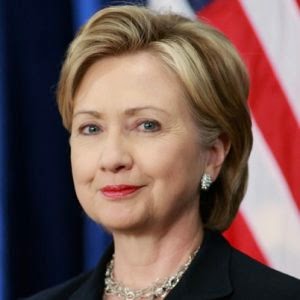 As noted in a prior post, Hillary Clinton has thrown down the immigration reform gauntlet to the Republican clown car occupants in a move that will likely help even more Hispanics get the message that today's Republican Party is anti-immigrant and for all intent and purposes, the party of white supremacy.  An editorial in the New York Times looks at this bold move that should trigger all kinds of disingenuous tap dancing from Hillary's opponents.  Here are excerpts:

With her speech on immigration in Las Vegas on Tuesday, Hillary Rodham Clinton took a large step forward, up front and to the left of President Obama. That is a good place to be for a presidential candidate who proposes to get the stalled debate moving again, and to bring hope to the millions living here outside the law.

Mrs. Clinton defended a path to citizenship for those 11 million, and promised as president to take executive action — more broadly than Mr. Obama has — to defer the deportations of those who have strong bonds to the community through family and work. She also promised to make conditions “more humane” for immigrant detainees.

Mrs. Clinton noted that her call for a citizenship path sets her apart from any and all Republicans who are in, or likely to enter, the 2016 race. The same is true of her support for executive action.

Like Mr. Bush, Senator Rand Paul of Kentucky speaks compassionately of immigrants at times, but his agenda seems limited to sealing the border and ending the 14th Amendment guarantee of citizenship by birth. Gov. Scott Walker of Wisconsin just wants every unauthorized immigrant to leave the country — and he wants to limit legal immigration, too.

Creating a citizenship path requires Congress to pass a bill, and there’s no sign when that will happen. “If Congress refuses to act,” Mrs. Clinton vowed, “as president I will do everything possible under the law to go even further. There are more people — like many parents of Dreamers and others with deep ties and contributions to our communities — who deserve a chance to stay. I’ll fight for them, too.”

There is a pressing need to lift the burden of fear and separation from families, to unshackle workers who are chained to exploitive jobs by fear of deportation. Mrs. Clinton has shown that she understands this. But meanwhile, the Republicans are stuck in the early 2000s, still talking of border security and illegal invaders. They forget that the 11 million are on this side of the border, and have children, and roots, and jobs, and dreams, and their plight needs to be confronted.

Here is a tip: When you hear candidates talking about securing the border — a border that is as secure as it’s ever going to get — that is the sign that they are not interested in a serious conversation.