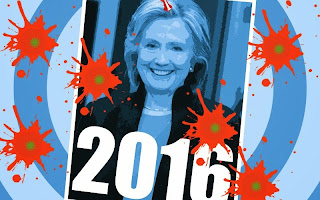 The right wing noise machine continues to bluster about the book "Clinton Cash" even though the books author has been forced to admit that he found no "smoking gun."  Meanwhile other detractors of Hillary Clinton often make unattractive pundits - think Ann Coulter who looks like an anorexic drag queen in my view - and run the risk of alienating women if the appear to beat up on the only viable female presidential candidate to date.  A piece in The Daily Beast suggests that efforts to attack Hillary Clinton's character will likely fail - or backfire.  Here are excerpts:

If you’re Martin O’Malley, or one of the other potential Democrats pondering a race against Hillary Clinton, you’ve been presented with an unexpected opportunity—and a very, very tricky challenge.

The spate of stories about the interconnections between the Clinton Foundation, the Clintons’ wealth, and Hillary Clinton’s tenure as Secretary of State have opened up a line of attack against the prohibitive Democratic favorite that was once the province of her ideological foes. For close to a quarter-century now, the willingness—make that eagerness—of voices on the Right to embrace every accusation against the Clintons has proven to be a pearl of great price for Bill and Hillary, serving to insulate them politically from allegations that were, in fact, credible.
Throughout their political lives, the Clintons have successfully—and often accurately—argued that the criticism have come from those opposed to their agenda. Now, two news outlets that embody the “Mainstream Media” so much scorned on the Right have weighed in with stories that undergird precisely the same argument.

And herein lies the opportunity—and the dilemma—for O’Malley or any of the other possible Democratic challengers: what do you do with the argument that the case against Hillary Clinton is a matter not of ideology, but of character?

As far as I can tell, no intra-party campaign against a prohibitive favorite has ever been waged on such grounds.

Up to now, Clinton’s potential rivals have been taking the traditional route of arguing that she does not truly reflect the Democratic base on issues like income inequality and corporate regulation. Now, they have been handed a much more potent argument: that the financial behavior of the Clintons demonstrates that they identify with the one per cent—or one-tenth of one per cent—and that their conduct will be as big a liability to Hillary Clinton as Mitt Romney’s business career and tax returns were to him in 2012.

But, as with nitroglycerin, a potent substance can also be highly dangerous. Bill Clinton is the most admired man in America; and among Democrats, his approval rating is stratospheric. Up to now, there has been no significant unhappiness within her party at the prospect of a Hillary Clinton nomination—not to mention the significant cohort of voters eager to see a woman elected President.

[N]othing is more likely to rally Democrats around Clinton than the assaults from across the political divide. Throughout their public lives, Bill and Hillary Clinton have benefitted enormously from the fury of their ideological enemies. Making a case that will persuade Democrats to move away from Clinton on character grounds will be the political equivalent of defusing a ticking bomb.