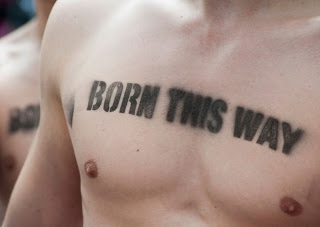 Having hopefully completely lost the marriage equality battle (we will know for sure when the U.S. Supreme Court hands down its ruling in late June), Christofascists and anti-gay extremists are losing other battles as well.  One such front is the right to subject LGBT minors to "ex-gay" torture conversion therapy.  Today, Oregon joined the slowly growing list of states that havebanned licensed therapists - in my view, the bans need to include ANYONE trying to change sexual orientation, including quacks at church "ministries" - from subjecting those under age 18 to so-called "conversion therapy" and "reparative therapy."  Every legitimate medical and mental health association condemns such voodoo like therapy.  Yet the Christofscists continue to push it as part of their propaganda that being gay is a "choice" and, of course to rake in money as their prey on ignorant and homophobic parents and self-loathing gays.  Here are highlights from a press release from National Center for Lesbian Rights (NCLR):

Today, the Oregon State Senate passed HB 2307, a bill that will protect lesbian, gay, bisexual, and transgender (LGBT) youth from the dangerous and discredited practice of conversion therapy. The bill was overwhelmingly approved by the State House on March 17 and is now heading to the desk of Governor Kate Brown who is expected to sign it into law.
When signed into law, Oregon will become the fourth jurisdiction—behind California, New Jersey, and the District of Columbia—to pass legislation protecting LGBT youth from the serious harms caused by these practices, which have been linked to substance abuse, serious depression, and even suicide.
"This lifesaving law will protect the health and well-being of LGBT youth in Oregon and ensure that licensed mental health professionals cannot abuse their position of trust to do lifelong harm to children and tear families apart. We applaud Basic Rights Oregon and bill champions Rep. Rob Nosse and Sen. Sara Gesler for their unshakeable leadership in guiding this bill through the legislative process, as well as the courageous survivors who testified on its behalf,” said the National Center for Lesbian Rights (NCLR) #BornPerfect Campaign Coordinator and Staff Attorney Samantha Ames.
“No young person should be subjected to this extremely harmful and discredited practice that uses fear and shame to tell them the only way to find love or acceptance is to change the very nature of who they are,”
“Psychological abuse has no place in therapy, no matter the intention. While the LGBT youth in Oregon will soon be protected once this bill is signed into law, HRC and our allies are committed to making sure these kinds of protections are secured in every state.”

Thankfully, the U.S. Supreme Court recently rejected the appeal of New Jersey's law by Liberty Counsel, an extremists "Christian law group" - it was Liberty Counsel's 6th straight loss trying to defend this form of torture.  Ultimately, the only basis for believing that LGBT individuals must change is religious based ignorance and bigotry.    For more information on the dangers of discredited "conversion therapy" go here.
Posted by Michael-in-Norfolk at Thursday, May 07, 2015