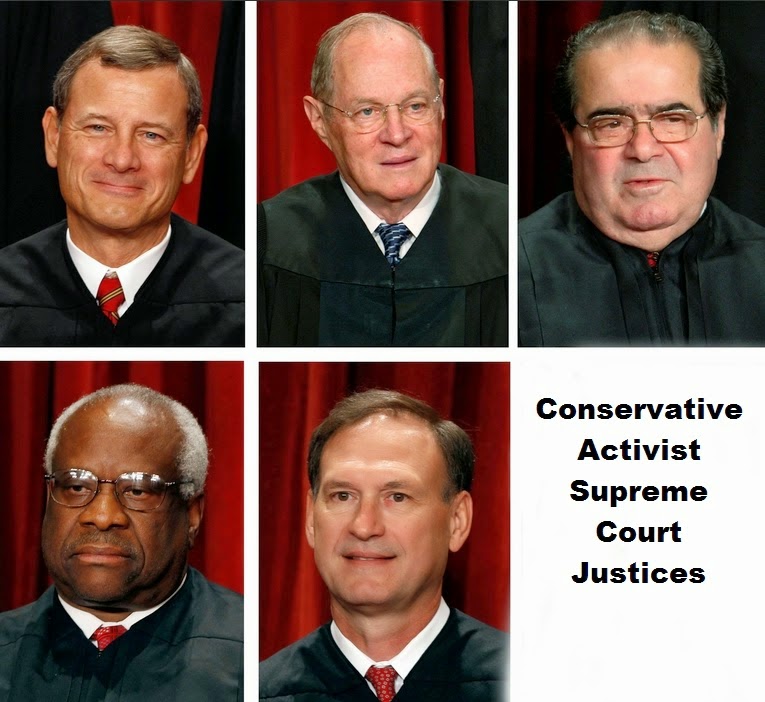 There are not surprisingly comments across the blogosphere about the ruling by the all male, all Catholic majority on the U.S. Supreme Court perpetuating the ludicrous myth that corporations are "persons" that hold "religious beliefs."  The ruling was a victory for Christofascists who are increasingly demanding special rights and the ability to exempt themselves from any laws they don't like so long as the claim their bigotry and/or ignorance is based on "religious belief."  I suspect the Founding Fathers would be shocked by today's holding.   More importantly, the ruling sets the stage more more attacks on women's rights and, by extension, further demands by the "godly folk" to be able to discriminate against LGBT Americans at will.  The majority opinion was written by Justice Samuel Alito - no mental giant in my view, although a genius compared to the brain dead Clarence Thomas - and the most significant opinion released was the dissent of Justice Ginsburg who ripped the majority a new one although outwardly polite.  Here are highlights from Ginsburg's dissenting opinion that begins on page 60 of the complete ruling found here:

In a decision of startling breadth, the Court holds that commercial enterprises, including corporations, along with partnerships and sole proprietorships, can opt out of any law (saving only tax laws) they judge incompatible with their sincerely held religious beliefs. See ante, at 16–49. Compelling governmental interests in uniform compliance with the law, and disadvantages that religion-based opt-outs impose on others, hold no sway, the Court decides, at least when there is a “less restrictive alternative.” And such an alternative, the Court suggests, there always will be. . . .

The exemption sought by Hobby Lobby and Conestoga  would override significant interests of the corporations’ employees and covered dependents. It would deny legions of women who do not hold their employers’ beliefs access to contraceptive coverage that the ACA would otherwise secure.

Lacking a tenable claim under the Free Exercise Clause, Hobby Lobby and Conestoga rely on RFRA, a statute  instructing that “[g]overnment shall not substantially burden a person’s exercise of religion even if the burden  results from a rule of general applicability” unless the government shows that application of the burden is “the least restrictive means” to further a “compelling governmental interest.”

Until this litigation, no decision of this Court recognized a for-profit corporation’s qualification for a religious exemption from a generally applicable law, whether under the Free Exercise Clause or RFRA.

The absence of such precedent is just what one would expect, for the exercise of religion is characteristic of natural persons, not artificial legal entities. As Chief Justice Marshall observed nearly two centuries ago, a corporation is “an artificial being, invisible, intangible, and existing only in contemplation of law.”

The Court’s determination that RFRA extends to for profit corporations is bound to have untoward effects.  Although the Court attempts to cabin its language to closely held corporations, its logic extends to corporations of any size, public or private.  Little doubt that RFRA claims will proliferate, for the Court’s expansive notion of corporate personhood—combined with its other errors in construing RFRA—invites for-profit entities to seek religion-based exemptions from regulations they deem offensive to their faith.

Would the exemption the Court holds RFRA demands for employers with religiously grounded objections to the use of certain contraceptives extend to employers with religiously grounded objections to blood transfusions (Jehovah’s Witnesses); antidepressants (Scientologists);  medications derived from pigs, including anesthesia, intravenous fluids, and pills coated with gelatin (certain Muslims, Jews, and Hindus); and vaccinations (Christian) Scientists, among others)?

There is an overriding interest, I believe, in keeping the  courts “out of the business of evaluating the relative merits of differing religious claims,” Lee , 455 U. S., at 263, n. 2 (Stevens, J., concurring in judgment), or the sincerity with which an asserted religious belief is held. Indeed, approving some religious claims while deeming others unworthy of accommodation could be “perceived as favoring one religion over another,” the very “risk the Establishment Clause was designed to preclude.”

Lest we forget, many one time segregationists justified segregation on religious belief.  One has to shudder and wonder how this majority on the Court would rule were that argument presented today.  Perhaps I should not admit it, but by some projections Christians - and conservative Christians in particular - will eventually be in a minority in America, and a part of me hopes that when that day comes the courts will allow non-Christians the special right to discriminate against Christians that the Christofascists are currently demanding for themselves.  It would be delicious "divine justice" in my view.  Individuals like the owners of Hobby Lobby are not nice or decent people.  They are selfish, self-centered and do not give damn about the rights of anyone but themselves.