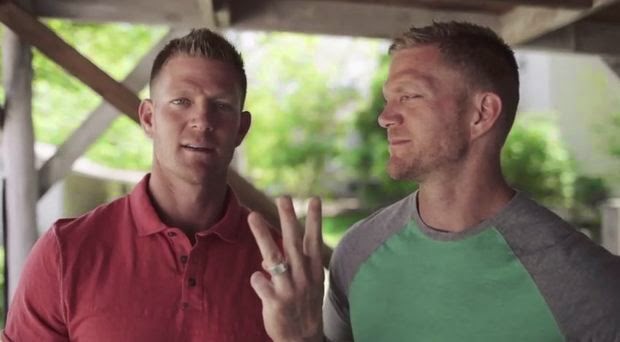 I often wonder what type of mind altering drug or head trauma (or form of  mental illness) afflicts the "godly folk" who seem to suffer from a level of self-absorption that one simply does not encounter among normal individuals - or even most high drama queens.  A case in point?   David and Jason Benham who were set to start a reality TV career on HGTV involving house-flipping until word got out that the two were nasty anti-gay, anti-abortion, and anti-Muslim extremists.  Once the true despicable nature of the evil twins got out, HGTV quickly killed the show.  Ever since the twins have been bleating and whining and playing the martyr card.  The Raw Story looks at the self-absorbed batshitery of the Benham twins.  Here are highlights:

A pair of anti-LGBT twins compared losing their proposed reality TV show to religious martyrdom, the D-Day invasion, and the movie “Braveheart” earlier this month at a religious right gathering.

“We just remember June the 6th, 1944,” said Jason Benham at the Road to Majority conference. “We know what happened at D-Day. We know what happened on Omaha and Utah beach. There’s something about those men that our dad taught us when we were kids, and he said, ‘Boys, don’t you ever run from bullets. You run toward the bullets.’”

HGTV called off its plans last month for a reality series “Flip It Forward” starring the brothers, who have compared same-sex marriage to Nazi Germany and taken part in rallies against LGBT and reproductive rights, after the pair’s views were publicized.

“There are cultural bullets flying, all over today, especially religious liberty, and what’s happening right now is many spiritual leaders, elected leaders, they are running from bullets,” Jason Benham said. “But there’s a remnant of people that are ready to stand and say ‘I’m not running from these bullets any more. I’m going to take this beach.’”

Right Wing Watch reported Friday that the Benhams took part in the June 20 gathering, which was organized by Ralph Reed’s Faith and Freedom Coalition, and are scheduled to take part in the Values Voters Summit in September.

The brothers, who are the sons of anti-abortion activist Flip Benham, have portrayed themselves as victims who were silenced by satanic forces for voicing their Christian beliefs.

In my view, the Benhams are examples of what is wrong with conservative Christianity.  They are all about condemning and hating others and demanding religious freedom only for themselves.  It's small wonder that the under 30 generations are fleeing institutional Christianity.  If there is anything Satanic going on, I'd say its the Benhams and their modern day Pharisee allies.