The GOP and Christofascists Perversion of America's Founding Principles 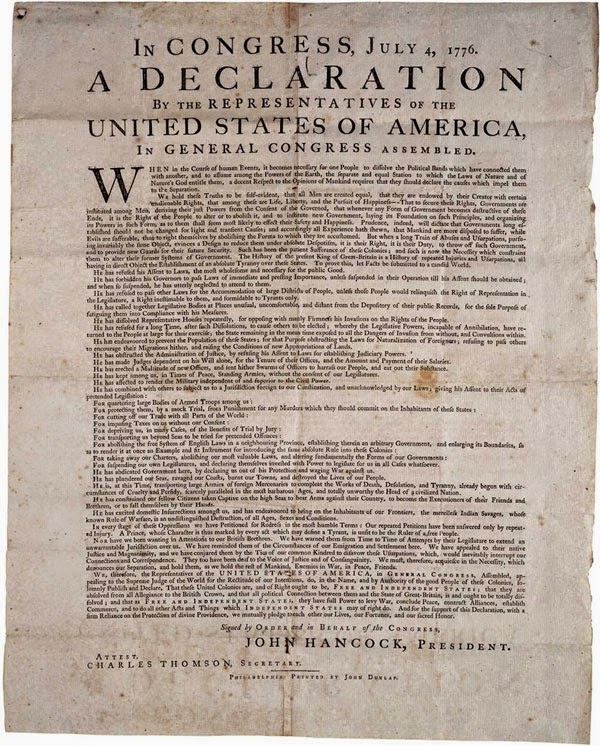 NOTE:  This is a modified repost of a piece from four years ago which is applicable today as it was when first written:

Many, many newspapers across the nation are carrying the text of the Declaration of Independence as their main editorials. Many will also carrying a number of letters and statements from individuals reverently considered among the Founding Fathers. The irony is that many of the concepts espoused in these writings are rejected daily by the far right GOP base and the Christianists who would rewrite history. The most obvious part of the Declaration of Independence rejected by these self-anointed "patriots" is the following:

We hold these truths to be self-evident, that all men are created equal, that they are endowed by their Creator with certain unalienable Rights, that among these are Life, Liberty and the pursuit of Happiness.
*
These false patriots who claim to revere the founding principles of this nation would have everyone believe that all are created equal so long as they are white, heterosexual, non-Hispanic, non-immigrant, and preferably conservative Christian. Hopefully, those whom these individuals would exclude from equality will be inspired today to redouble their efforts to oppose those who would destroy the founding principles of this nation. While not available online, the Daily Press provides interesting insights with letters written by the Founders. Here is a sampling of highlights:

*
Benjamin Franklin in a speech to the Constitutional Convention on September 17, 1787: "most sects in Religion, think themselves in possession of all truth, and that wherever others differ from them, it is so far error. Steele, a Protestant, in a dedication tells the Pope that the only difference between our Churches in their opinion of the certainty of their doctrine is, the Church in Rome is infallible and the Church of England is never wrong. . . . I cannot help expressing a wish that every member of the Convention who still may have objections to it [the proposed Constitution], would with me, on this occasion, doubt a little of his own infallibility, and make manifest our unanimity, put his hand to this instrument."
*
Thomas Jefferson on funding public education and teaching science on January 6, 1816 in a letter to Charles Yancey: "If the legislature would . . . forever maintain a system of primary or ward schools, and a university where might be taught, in its highest degree, every branch of science . . . . If a nation expects to be ignorant and free, in a state of civilization, it expects what never was and never will be."
*
George Washington to the United Baptist Churches in Virginia on May 10, 1789: "For you, doubtlessly, remember that I have often expressed my sentiment that every man, conducting himself as a good citizen, and being accountable to God alone for his religious pinions, ought to be protected in worshipping the Deity according to the dictates of his own conscience."
*
Abigail Adams in a letter to John Adams on March 31, 1776: "And, by the way, in the new code of laws which I suppose it will be necessary for you to make, I desire that you would remember the ladies and be more generous and favorable to them than your ancestors. Do not out such unlimited power into the hands of the husbands. Remember, all men would be tyrants if they could. . . . . Men of sense in all ages abhor those customs which treat us [women] as the (servants) of your sex; . . ."

It takes little analysis to realize that those who oppose equality for LGBT Americans , look down on blacks and Hispanics with contempt, and who would force all citizens to live in accordance with one set of religious beliefs are the enemies of these founding principles of this nation. We owe a duty to the Founders to never let the likes of the Christianists, the white supremacist, today's Tea Party/Christofascists Republicans and others like them prevail in their effort to subvert the Constitution. Hence why I will always continue to tell the truth about such people and anti-democratic religious denominations even as they continue to lie about us and the true intent of the Founders.
Posted by Michael-in-Norfolk at Friday, July 04, 2014

Email ThisBlogThis!Share to TwitterShare to FacebookShare to Pinterest
Labels: 4th of July, Declaration of Independence, equality under the civil law, founding fathers, subversion of the Constitution, Thomas Jefferson