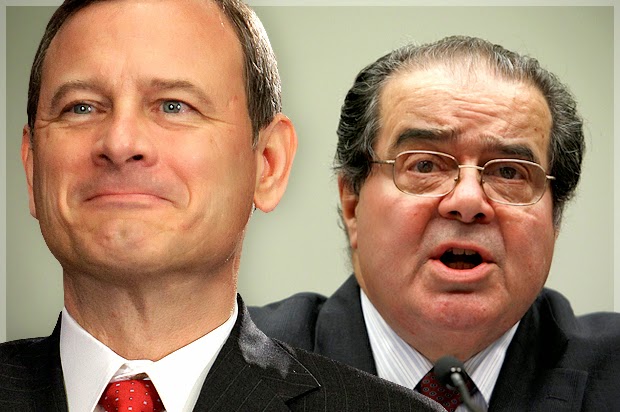 Chief Justice John Roberts once stated that he wanted to restore the image of the United States Supreme Court with the American public.  Instead, he has led the Court to historic lows in public approval and seems hell bent on crafting majority opinions that history will view as horrifically wrong.  While Roberts Court's rulings may sit well with big business and theocrats, they ought to send shivers down the backs of most Americans.  A piece in Salon looks at the sinking image of the Supreme Court and the ways in which Roberts will be remembered, absent huge changes, as an abysmal failure by history.  Here are article highlights:

It wasn’t quite March 6, 1857, or Dec. 12, 2000, but make no mistake: June 30, 2014, was not a good day for the U.S. Supreme Court. Not simply because it saw the court once again unveil two major decisions decided by a slim majority along partisan lines, but because the argument offered by the majority in the more controversial and closely followed of the two decisions was so conspicuously unprincipled that it will almost surely further erode public confidence in the nation’s highest court. As a Gallup poll also released Monday morning showed, it was already low; I bet it’s about to sink even lower.

In order to understand why Monday was such an important — and unfortunate — day for one of the United States’ most hallowed institutions, it’s necessary to revisit something Chief Justice John Roberts said in an interview way back in 2006. After crediting John Marshall’s legendary diplomatic skills for maintaining the unity and establishing the credibility of the court during its crucial early years, Roberts argued that, after 30-odd years of discord and squabbling, the Supreme Court was “ripe for a similar refocus on functioning as an institution” rather than as a collection of individuals with their separate politics, prejudices and philosophies. If the court failed to come together under his leadership, Roberts warned, it would “lose its credibility and legitimacy as an institution.”
Remember now, this was in 2006, when 5-4 splits on major, hot-button decisions was not yet the norm.

[I]t’s hard to conclude that John Roberts is, by the standards he established in 2006, anything more than an abysmal failure. More than at any time since perhaps the Lochner Era, the court is not only seen as a political actor, but is considered a particularly ideological and combative one at that. . . . . In 2005, Gallup asked Americans how much confidence they had in the Supreme Court: 41 percent said “a great deal” or “quite a lot.” That number today? A paltry 30 percent.

So when Justice Alito, who was the chief author of both of this term’s blockbuster decisions, relies on arguments as transparently political as those he wielded to decide Harris and Hobby Lobby, it makes Roberts’ work toward improving the court’s image that much harder.

In Roberts’ court, it’s not abstract ideas of justice and law and republican government that win the day — it’s corporations, religious conservatives, employers and anyone who worries first and foremost about the interests of the powerful and the elite. Unless John Roberts’ goals were other than those he outlined in 2006, Monday’s decisions can only be interpreted as yet another saddening defeat.

When the vast majority of the public loses confidence in the Supreme Court, it does not bode well for the rule of law.

Roger Tanney's court may have been short-sighted and sociopathic, but at least it wasn't (as far as I know) intentionally venal and corrupt.

Perhaps the day of the Red Mass at St. Matthew's Cathedral would be a good time to offer the justices "counseling" on judicial ethics. Even apart from the absurdity of anyone claiming to be concerned with "original intent" AND also claiming personhood for corporations, which barely existed when the Constitution was ratified, and now that that contrived "person" practices a religion ...