The GOP Has Lost the Obamacare Fight 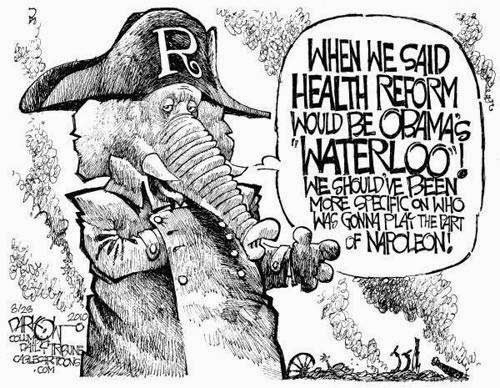 As the prior post noted, rational and thinking Republicans realize that Obamacare and universal healthcare are here to stay and that the GOP war against the Affordable Health Care Act is lost.   Unfortunately, much of the GOP base, especially the lunatics of the Tea Party do not grasp that reality.  A column by Juan Williams in The Hill looks at why the war on Obamacare is lost.  Here are excerpts:

Republicans bet the house that ObamaCare would be a disaster. They lost.

After a four-year feast criticizing ObamaCare, Congressional Republicans are now left picking at the crumbs of minor complaints. Their longstanding predictions of failure have come up empty. The healthcare reform plan is successful.

Even if Republicans gain control of the Senate in the midterm elections, the best they can do is stage the first Senate vote to repeal ObamaCare. That will come after 50 or more similar votes by the GOP majority in the House.

President Obama will veto any repeal bill, so even holding a vote amounts to one last gesture of futility from the defeated army of right-wing opposition.

More sour grapes are on display in the House. Republicans once promised to pass a detailed House plan as an alternative to ObamaCare before the midterms. But with the president’s program successfully launched, the House leadership has decided not to commit to any Republican plan until after the election.

GOP leaders rightly fear any such announcement would lead to a backlash. Voters would likely see the possibility of conservative proposals bringing forth bigger disruptions in the insurance markets and less coverage for the uninsured.

This Republican reversal of fortune on healthcare is producing sounds of silence on the campaign trail. As the predicted wave of voter anger over healthcare reform has failed to appear, several GOP candidates are saying nothing or politely suggesting small fixes to the Affordable Care Act.

Just a few months ago, the chair of the National Republican Congressional Committee, Rep. Greg Walden of Oregon, forecast that ObamaCare would be the number one issue used by Republicans to thump Democrats in this cycle. It would be a “category 5 political hurricane,” he insisted.

It turns out it is the Republicans who are being storm-tossed. They are nervously scavenging for anything they can find to fire up their voters.  They are jumping on complaints about the IRS; second-guessing the deal to release a prisoner of war; and ramping up complaints about the president’s decision not to keep U.S. troops in turbulent Iraq.

But those efforts have not had success. A recent NBC/Wall Street Journal poll shows voters lean toward Democrats on the question of which party they want to win majority control of Congress in the midterm races. That result comes in the same poll that has the president matching his lowest job approval rating.

The problem for Republicans is stark: The steady performance of the Affordable Care Act is speaking louder than their scare tactics.

And there is more good news on the performance of healthcare reform. The Times reported last week that more pharmaceutical companies are cutting the price of drugs to comply with requirements of new healthcare plans. In addition, more insurance companies are joining exchange programs.

On top of all this, the growth rate of Medicare spending has slowed while the Congressional Budget Office now projects a lower price tag for the Affordable Care Act as a whole. That includes potential profits for taxpayers if the government does not have to use risk pools to compensate any losses by insurance companies. And at the moment that looks to be the case.