Did the GOP Just Lose Big With Hobby Lobby Ruling? 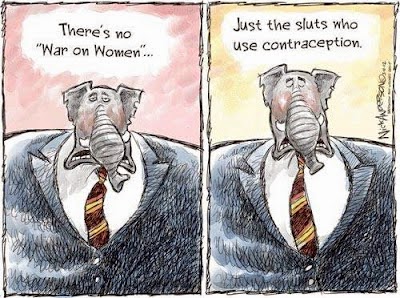 Some times winning can turn into losing.  Stated another way, a short term victory can sometimes be the precursor to losing the war.   While the religious extremists of the GOP base are busy celebrating the special rights granted to Christofascists like the owners of Hobby Lobby in yesterday's Supreme Court ruling, perhaps many more Americans, especially women, are not   More importantly, those less than pleased with the growing demands of the far right and the Christofascists do have an ultimate way to strike back - at the ballot box.  Andrew Sullivan summed the situation up well:

[W]hen the potential scope of this sinks in, and especially if more than a few companies start curtailing their female employees’ health coverage for religious reasons, I’d say you’re going to have a very divisive reaction.

Which raises the politics of this. I’d say it’s terrible for the right in everything but the short term. It may fortify the base, but the fact that this decision focuses exclusively on medications for women, and not for men, will surely fortify the other base even more. Even if you worry about religious liberty, why does religion in 21st Century America always seem to be about policing the sex lives of everyone but straight men? That may not be the intent of the ruling, but it is somehow always the effect. It’s not good PR.

I have a feeling that the lack of any female votes in the majority will also sink in. If the Republicans want to add fuel to the Democrats’ charge of a “War on Women”, they just got a tank of gasoline. And this could even be a real fault-line in upcoming national politics. Bobby Jindal is now running as the religious freedom candidate; Hillary Clinton will be the first woman candidate for president with bells on. She has already declared the ruling “deeply disturbing.”

I’d say the gender gap just widened a bit more; and the Democrats – especially young and single women – have just been given a reason to turn out this November and in 2016. As often with culture war battles, the winners can easily become losers. And I don’t need to remind the right that those who have no problem with contraception are a growing, big majority demographic and those opposed to contraception are a tiny and declining one. If you’re going to take a stand on religious conscience, why does it have to be restricting women’s choices in their insurance coverage?

One can only hope that unwittingly, the five aging white men on the Supreme Court who made this ruling just set the stage for the longer to loss of the GOP in the culture wars.