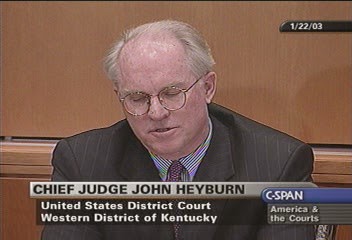 One has to wonder when the Christofascists - and more importantly elected state officials - are going to  cease defending bans on gay marriage as anything other than discriminatory laws based and motivated solely by anti-gay animus.   Yesterday's ruling striking down Kentucky's gay marriage ban followed the reasoning of the at this point numerous other rulings striking down such bans.  But in some ways it went further and in effect said that regardless of the level of scrutiny applied, i.e.,  rational basis,  heightened scrutiny,  or strict scrutiny the bans cannot stand because the case for banning gay marriage is so lacking in logic that defending attorneys general and/or governors ought to be tossed out of court.  Making the drubbing even sweeter is that Judge John G. Heyburn II was a George H.W. Bush appointee, not a Democratic appointee.  The opinion has some great quotes that trash the defendants.  Here are a few:


These arguments are not those of serious people. Though it seems almost unnecessary to explain, here are the reasons why. Even assuming the state has a legitimate interest in promoting procreation, the Court fails to see, and Defendant never explains, how the exclusion of same-sex couples from marriage has any effect whatsoever on procreation among heterosexual spouses.

Excluding same-sex couples from marriage does not change the number of heterosexual couples who choose to get married, the number who choose to have children, or the number of children they have … The state’s attempts to connect the exclusion of same-sex couples from marriage to its interest in economic stability and in “ensuring humanity’s continued existence” are at best illogical and even bewildering.

Numerous courts have repeatedly debunked all other reasons for enacting such laws. The Court can think of no other conceivable legitimate reason for Kentucky’s laws excluding same-sex couples from marriage. . . . that Kentucky’s laws do not deny licenses to other non- procreative couples reveals the true hypocrisy of the procreation-based argument.

It is truly refreshing when a judge has the honesty to call out hypocrites and the Republican political whores pandering to the Christofascists  through their attempted defense of laws based solely on religious based animus.
Posted by Michael-in-Norfolk at Wednesday, July 02, 2014

The rulings are becoming a tab more hostile in tone (to the anti-equality side that is), and I'm starting to wonder if all the judges are getting tired of having them come in with this..."throw it all at wall, and let's hope something sticks"...strategy?

I get the sense the judges are actually starting to take the attitude, "How many times are we going to have repeat ourselves as a judiciary."