America - the Land of Divisions 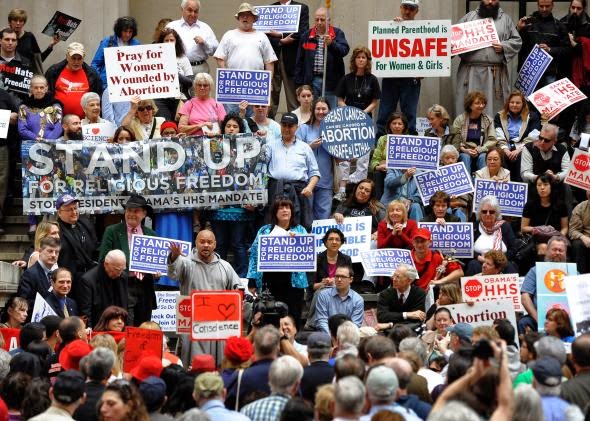 Throughout history religion has been a great divider.  After perhaps disease and famine, religion has claimed more lives through wars of religion and persecution of those of different faiths than any other force.  Yet, bizarrely, religion is given deference and special rights despite its historic toxicity.  Now, with Christofascists demanding exemptions from the laws that govern everyone else and embracing ignorance and opposing school curriculum  that teach science and a policies to confront climate change, is America poised to be divided between secular citizens and "religious" citizens?  That's the premise of a piece in Slate.  The article also looks at other causes for division many of which demonstrate the need for policies actively opposed by Republicans and their "real American" base. Here are highlights:

[F]or me, at least, Independence Day is also an opportunity for reflection on who we are as a nation and where we’re headed. I’ll admit that I’m worried.

Earlier this week, Belgium eliminated the United States from the World Cup. But consider that there is a decent chance that Belgium might not exist by the time the next World Cup rolls around, because of the bitter divide between its Flemish speakers and its French speakers. I say this with a heavy heart. Yes, Belgium. Congratulations on scoring your goals. Now enjoy the dustbin of history as your nation is torn apart by deep-seated ethnopolitical resentment. Meanwhile, the United States, a sprawling and spectacularly diverse continental republic with a heavily armed and famously irascible population more than 28 times that of Belgium, will almost certainly be around come 2018 . . .

[W]e Americans should not rest on our laurels. America is big, awesome, and beautiful. We’re also divided in ways we can’t afford to ignore.

Could America break apart along religious lines, with devout Christians going one way and the rest of us going another? Think of the old “Jesusland” meme—the map of a North America divided between “Jesusland,” the states that backed George W. Bush in the 2004 presidential election, and “the United States of Canada,” consisting of the states that backed John Kerry and Canada that delighted liberals enraged by Bush’s re-election. At least some devout religious believers fear that as the ranks of the religiously unaffiliated grow, and as secular Americans insist on imposing their values on others, the faithful might face persecution.


But there are other threats to American national unity looming on the horizon. My admittedly unscientific sense is that we are living through a period in which Americans’ sense of solidarity or group cohesiveness is declining. Liberals tend to see this decline in solidarity as a symptom of income and wealth inequality. Conservatives blame it on a rising emphasis on ethnic identity over national identity, or the turn to moral relativism. I see it as a product of the economic and social isolation of huge chunks of our population.


One challenge is a thoughtless immigration policy, which makes it hard for immigrants currently living and working in the United States to find a foothold in American life.

Then there is the intense concentration of poverty, the issue that keeps me up at night. While 14.9 percent of the U.S. population was below the poverty line in 2010, a quarter of all poor Americans lived in neighborhoods with poverty rates above 20 percent. These “poverty areas” are, as a general rule, disconnected from employment opportunities and high-quality educational options, and their inhabitants suffer from disproportionately high rates of violent crime and incarceration. The result is that the legitimacy of American institutions—the criminal justice system in particular, but other institutions as well—is on shaky ground in these parts of the country, as they seem to be rigged against those who live in them.

So as we celebrate the United States, let’s remember the forgotten corners of this country, where the promise of American life has yet to be fulfilled.

Email ThisBlogThis!Share to TwitterShare to FacebookShare to Pinterest
Labels: failed GOP policies, GOP Base, GOP war on the poor, immigration reform, poverty rate, religion as a justification for evil, religion of division