Why the Civil Rights Act Could Not be Enacted Today 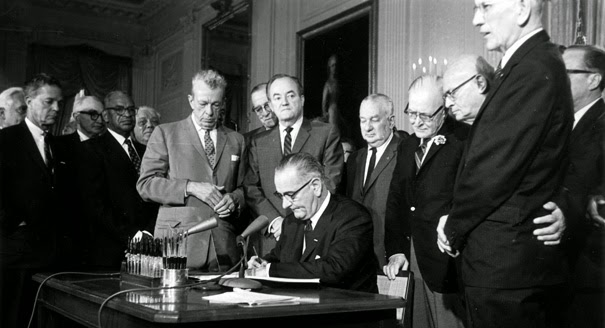 A piece in Politico looks at the political toxicity that envelops Washington and why the Civil Rights Act of 1965 could not secure passage today.  There are details in the piece but the reason why the Act could not be passed nowadays boils down to one word: Republicans.  Today's GOP bears no resemblance to the political party in which I grew up or in which I was an activist for the better part of a decade.  Today, the embrace of ignorance, hypocrisy filled religious extremism, and thinly veiled racism are the pillars of the party's current agenda.  Here are excerpts from the article:

It was a painful tableau: The bipartisan leaders of Congress linking hands in the Capitol Rotunda and swaying to the strains of “We Shall Overcome” as they commemorated the 50th anniversary of the passage of the Civil Rights Act of 1964. Harry Reid and Nancy Pelosi sang along with the crowd, but Mitch McConnell and John Boehner’s lips were frozen in silent, self-conscious smiles.

The climate in today’s Washington is so different from the one that produced what many scholars view as the most important law of the 20th century that celebrating the law’s legacy is awkward for Republicans and Democrats alike. Neither party bears much resemblance to its past counterpart, and the bipartisanship that carried the day then is now all but dead.

“The Republican Party today doesn’t really honor its past,” said Geoffrey Kabaservice, author of “Rule and Ruin: The Downfall of Moderation and the Destruction of the Republican Party from Eisenhower to the Tea Party.” “The Republican Party that had been ceased to be sometime in the 1980s, and the modern party — the radical conservative party — not only has little or no interest in honoring its history, it is actively hostile to it.”

Part of the problem is this: Although the Civil Rights Act passed the Senate by 73-27, with 27 out of 33 Republican votes, one of the six Republicans who voted against it was Barry Goldwater of Arizona, who weeks later became the GOP’s presidential standard-bearer and started the long process by which the Party of Lincoln became the party of white backlash, especially in the South. Today, Republicans hold complete legislative control in all 11 states of the Old Confederacy for only the second time since Reconstruction.

The position of the GOP’s congressional wing on issues from immigration, to voting rights, to the minimum wage (while helping to rack up Republican victories in individual districts) is broadly alienating to most African-American voters. So are efforts at the state level to impose new voter identification laws or other limits on access to the ballot box that disproportionately affect black voters. All that makes it hard for today’s GOP to lay plausible claim to its undisputed legacy on civil rights.

[R]estoration of a key provision of the 1965 Voting Rights Act that the Supreme Court struck down last year — is given no chance of passing the House, despite co-sponsorship from Rep. Jim Sensenbrenner (R-Wis.) for creating new criteria for determining which states must obtain approval from the Justice Department before changing their voting laws.

“There are no real Republican leaders on civil rights or voting rights, aside from Sensenbrenner,” said Richard Hasen, a law professor at the University of California, Irvine, and author of the Election Law Blog. “And it’s only going to get more awkward, because we’re coming up on the 50th anniversary of the Voting Rights Act, and the Equal Employment Opportunity Commission. The anniversaries of all these just serve to show how different things are today.”