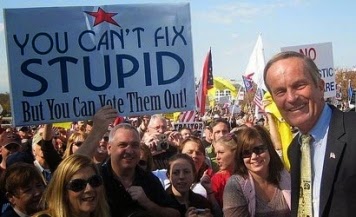 I get accused of being hard on Christofascists and those of of them who masquerade under the smoke screen moniker.  I make no apologies.  I have a hard time with those who almost joyously embrace ignorance rather than accept the possibility that they were sold a false bill of goods by the snake oil merchants in the pulpits they grew up listening to each week.  Embracing ignorance is a choice - just as religious belief is a choice - and there is no reason why those who prefer to remain stupid and/or bigoted deserve a shred of respect in my book. Yes, they are free to hold their beliefs, but they should not be allowed to force their idiocy on others or impede government action on matters where objective facts and reality are no longer in debate outside of the coven of cretins in the GOP base.  A column in the Washington Post looks at the Tea Party's blythe embrace of ignorance on the issue of climate change.  Here are excerpts:

A friend of mine worked for a small-town newspaper years ago and had to write the weather report. The county fair was approaching, but the prediction was for rain. So the editors, fearing the wrath of local merchants, ordered my friend to change “rainy” to “sunny.” That was the newspaper’s policy. It has since been adopted by much of the Republican Party.

It is a stunning thing, when you think about it: GOP conservatives adopting a position of studied ignorance or, to put it more humorously, a version of what Chico Marx said in “Duck Soup”: “Well, who you gonna believe, me or your own eyes?”

My own eyes show rising ocean levels. They show the Arctic ice cap shrinking. They show massive beach erosion, homes toppling into the sea and meteorological records indicating steadily increasing temperatures. The Earth, our dear little planet, just had the hottest May on record.

My eyes read projections that are even more dire — drought, stifling heat, massive and more frequent storms, parts of coastal cities underwater and, in the American Southeast, an additional 11,000 to 36,000 people dying per year from the extreme heat.

Paulson has pointed out that global warming is bad for business (also for human beings) and steps should be taken to modify it. Among other things, the United States could reduce carbon emissions (mostly from coal-fired plants) that have contributed so much to global warming. Paulson believes, purely from the evidence, that human beings have contributed to the coming crisis.

Not so, cries the tea party. Not so, echoes most of the GOP’s potential presidential candidates. The list of deniers includes Sen. Ted Cruz of Texas, Sen. Marco Rubio of Florida, Sen. Rand Paul of Kentucky and former senator Rick Santorum of Pennsylvania.

A Pew Research Center poll last November found that 67 percent of Americans think the planet is indisputably getting warmer. Among Democrats and Democratic leaners, however, the figure is 84 percent, but among tea party types it’s 25 percent. Maybe more to the point, only 9 percent of tea party members think “human activity” has contributed to global warming.

What possesses the tea party on climate change? Some of it has to do with traditional anti-establishment sentiment. If the elite say it’s getting hot, then it must be getting cold. Mostly, though, its position is rooted in a raging antipathy toward (hiss!) big government.

[R]eports will be issued and the Obama administration will pump for a reduction in carbon emissions and much of the Republican Party will deny the undeniable. But the waters will rise and the country will bake. Years from now, people gasping for air will ask how we let this happen and the GOP, sticking to its plan, will deny that anything is happening at all.