The Disruptive Force of Equality 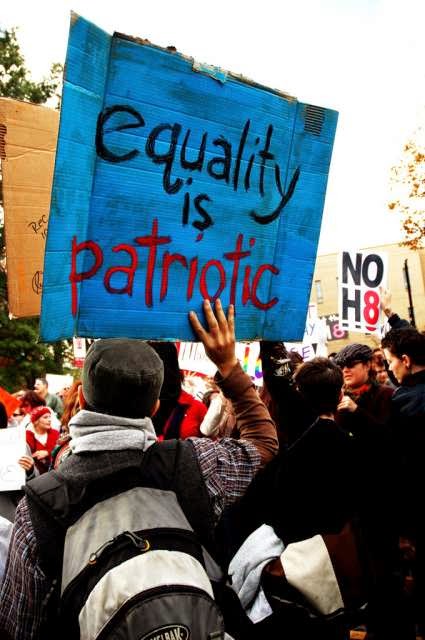 At the time that the Declaration of Independence was penned, the concept embodied by the words "We hold these truths to be self-evident, that all men are created equal, that they are endowed by their Creator with certain unalienable Rights, that among these are Life, Liberty and the pursuit of Happiness" were foreign concepts around the entire globe.  Most nations were ruled by monarchies or were colonies of nations ruled by monarchies.  Indeed, it would be another 143 years before most of the European monarchies which were the norm in 1776 were to fall in the aftermath of World War I.   Worse yet, slavery still existed in many parts of the globe, including in America itself.  One might wonder whether or not Thomas Jefferson who slipped the language into the Declaration fully foresaw the power of his selected language or the difficulty which America would encounter in delivering on the lofty concept.  Today's struggle for LGBT equality is but the latest installment on America's journey to live up to the Declaration principles.  A column in the Washington Post looks this difficulty journey which, ironically, is being impeded most by the Christofascists, Tea Party set and today's Republican Party who claim to cherish American ideals.  Here are excepts:

On July 9, 1776, when the Declaration of Independence was publicly read to the citizens of New York City — “We hold these truths to be self-evident . . .” — they responded by decapitating an equestrian statue of King George III, cutting off his nose and placing his head on a spike outside a tavern. Metal from the statue was later turned into 42,088 bullets, intended, by one account, “to assimilate with the brains” of the British.


The “glorious cause” split the fledgling country roughly into thirds — patriots, the uncommitted and loyalists (who sometimes were roughly treated). The Civil War was not the first American conflict that divided families. William Franklin, Ben’s illegitimate son, was the last royal governor of New Jersey. His father disinherited him.

And the ideals of the new nation were immediately rendered hypocritical by the presence of about 600,000 enslaved human beings. The British took full (and appropriate) propaganda advantage. “How is it,” said Samuel Johnson, “that we hear the loudest yelps for liberty among the drivers of Negroes?”


Yet one of those slave owners, Thomas Jefferson — bookish, retiring, possessing what John Adams called a “happy talent for composition” — injected a philosophic statement into a protest movement: “We hold these truths to be self-evident: that all men are created equal, that they are endowed by their Creator with certain unalienable rights, that among these are life, liberty and the pursuit of happiness.”

America could have declared itself independent from Britain without declaring all men equal. The various “injuries and usurpations” relating to the traditional rights of Englishmen would have been enough. But something more ambitious and universal got planted.

The seed lay dormant for decades. . . .  While Lincoln had little respect for Jefferson as a political figure, he praised him for “the coolness, forecast and capacity to introduce into a merely revolutionary document an abstract truth . . . and so to embalm it there, that today, and in all coming days, it shall be a rebuke and a stumbling block to the very harbingers of reappearing tyranny and oppression.”

Because Jefferson inserted an abstract truth into a bloody, fratricidal struggle, Lincoln could claim the mantle of the Founders during a bloodier struggle, essentially refounding the country on the best interpretation of its principles. After a further century of African American suffering, striving and demand, Lyndon Johnson could sign the Civil Rights Act of 1964 and hand a pen to Martin Luther King Jr. Slowly, awkwardly, America was learning to understand its own language.


This story justifies a mix of realism and idealism. Our advance toward the ideals of the Declaration has been protracted, violent and often hypocritical. And yet: All men are created equal. The phrase is enough to cause a catch in the throat.

The idea of equality still drives people to amazing, almost irrational, sacrifices. It remains the most disruptive, hopeful force of history: All men are created equal. Just a whisper of the words is enough to cause humble people to sacrifice everything; enough to cause tyrants to fear.


This is not, in the end, just an American language. Shortly before his death, Jefferson reflected that the Declaration was “pregnant with our own, and the fate of the world.” A difficult delivery, no doubt. But long expected.

The take away?  That it is those who continue to decry immigrants, those who oppose LGBT equality, and those who still hold segregationist beliefs that are the betrayers of America's founding principles, not the targets of their hate and animus.