Rowan Williams Prostitutes Himself for "Unity" 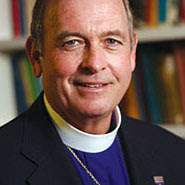 One outcome of the Lambeth Conference is that it has become increasingly clear that Archbishop of Canterbury Rowan Williams has thrown gays under the bus in order to maintain "unity" within the Anglican Communion and keep homophobic bishops (predominantly from Africa where an ignorant, uneducated population allows them to be anti-gay demagogues) from bolting from the Communion. Had denominations in the USA employed that mentality during the 1850's and 1860's I suspect slavery would have continued for far longer and the Civil War might have been averted or delayed in occurring. Unity for the sake of unity and at the price of doing what's morally wrong is no victory. Sometimes doing the right thing is not universally popular and some may take there toys and walk away. Better in my view to be right than go with the herd in the wrong direction. Moreover, Rowan Williams isn't even being consistent with his past writings. I believe that the Bishop of Washington, D.C., has the better understanding of what's right. Here are some highlights from the [London] Timesonline concerning Williams' sell out of gays:
*
Rowan Williams believes that gay sexual relationships can “reflect the love of God” in a way that is comparable to marriage, The Times has learnt. Gay partnerships pose the same ethical questions as those between men and women, and the key issue for Christians is that they are faithful and lifelong, he believes. Dr Williams is known to be personally liberal on the issue but the strength of his views, revealed in private correspondence shown to The Times, will astonish his critics.
*
As Archbishop of Canterbury, Dr Williams recommitted the Anglican Communion to its orthodox position that homosexual practice is incompatible with Scripture at the Lambeth Conference, which closed on Sunday. However, in an exchange of letters with an evangelical Christian, written eight years ago when he was Archbishop of Wales, he described his belief that biblical passages criticising homosexual sex were not aimed at people who were gay by nature.
*
He wrote: “I concluded that an active sexual relationship between two people of the same sex might therefore reflect the love of God in a way comparable to marriage, if and only if it had about it the same character of absolute covenanted faithfulness.” Dr Williams described his view as his “definitive conclusion” reached after 20 years of study and prayer.
*
Liberals have been bitterly disappointed that a man whom they regarded as chosen to advance their agenda has instead abided by the traditionalist consensus of the majority.
*
In contrast to Williams' mealy mouth sell out of gay Christians, here are highlights from Timesonline of what John Chane, Bishop of Washington, D.C. (pictured above), has to say concerning the reactionary homophobes like Archbishop Peter Akinola of Nigeria (who I view as anything but a Christian except in name) who are pushing an anti-gay jihad:
*
A leading Anglican bishop has condemned conservatives as "demonic" for using his church as a punch bag. The Bishop of Washington, the Right Rev John Chane, a leading liberal in the Episcopal Church in the United States, accused conservatives of leading the church in a "dangerous" direction. Bishop Chane, whose diocese covers the American capital, said: "I think it's really very dangerous when someone stands up and says, 'I have the way and I have the truth and I know how to interpret holy scripture and you are following what is the right way.' "I think it's really very, very dangerous and I think it's demonic ... the Episcopal Church has been demonised.
*
Peter Akinola, the Nigerian primate, who is among those boycotting Lambeth, told the BBC: "Gafcon is a rescue mission - it is our duty to rescue whatever is left of the church from error, from all those, whoever they are, who have chosen to mutilate, to distort and to even deny the Gospel and to preach something different from what we know."
Posted by Michael-in-Norfolk at Thursday, August 07, 2008

We in TEC--and I base this on today's press meeting with the PB and Bishop Sisk--have a lot of work to do before GC2009, though it seems clear no covenant will be ready by the July 2009 GC, which, imho, is great. If you have not read it already, you can at the lead, or the recording/video (I guess) will be up on episcopalchurch.org, if it is not already.