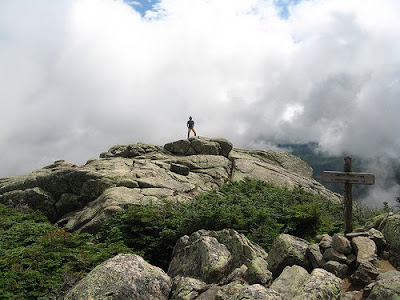 UPDATED: I just got back from dinner with my youngest daughter (who often forgets to relay information) who said my son spoke briefly to my ex-wife two days go. He said the weather had been terrible with much rain and temperatures in the 40's. He and a cohort had actually made it into town - she did not remember the town's name - and bought some more fleece to stay warmer. He thinks he should be done in a week and a half maximum.
*
*
I have not heard from my son since the last post around July 30th. He's on the home stretch, but the terrain is arduous and apparently the weather is not good. Thus, I was non-plussed to get this e-mail today:
*
Hello Michael, I found your blog when I was googling everything Appalachian Trail. My boyfriend is on the trail and is in Maine, he is pretty miserable with the constant rain, cold temp, flooding and lack of bridges. Is your son Bad Idea still on the trail or did he finish or leave? I hear it's so bad in Maine people are just quitting with only 200 miles left to go. My guy wishes he could quit but won't let himself do it. He's has about 160 miles left to go. It's just crazy.
*
Checking the Appalachian Trail Journals here, it shows Bad Idea, my son, is still hiking. "Highlife," one of his compatriots for at least part of the trip has headed home per this entry in his trail journal (a photo my son labeled Highlife is posted abve):
*
After hiking for way too long ive decided to head on homeI mean I had my thru hike and the weather was much better . So thats it. I had a great time. Thanks to my Mom , crazybear (nobo07) , dethmarch( wva-me wva-ga07), blueskies (nobo07),loredo (nobo07) , trapper 08 , Shiloh, certain, and many many more. highlife wva-me wva-ga 07 wva-rangeley 08 -High Life
Posted by Michael-in-Norfolk at Saturday, August 09, 2008

No no no, you posted the wrong Rabbit. There are three rabbits on the trail. My Rabbit isn't on trail journals.