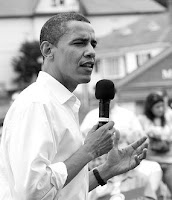 I continue to be dumbfounded by gays who continue to support John McCain and/or the GOP in general. Why not convert to Judaism and then join the American Nazi Party? It makes about the same amount of sense. Yes, there once was a day when the Republican Party had many moderates, but now it's clearly the far right element that is dictating policy. John McCain's shameless pandering to that group underscores this reality. One need only consider McCain's announced support for the anti-gay Constitutional amendment in Arizona or his views on gay adoption to figure out that the man is no friend of LGBT citizens. Yes, I was once a Republican, but when the Party started to go over to the "dark side" and became controlled by Christianists, I resigned from the Party and have since done all I can to see it lose at the polls. In contrast Barack Obama -while not as supportive of full gay marriage rights as I would like - still comes out strong for increased equality for LGBT citizens and their families.
*
On Wednesday, July 23 Jennifer Chrisler, Executive Director of Family Equality Council, issued identical letters to Sens. McCain and Obama, outlining the vast array of family types in this country and asking both candidates to explain how their administrations would work to recognize, respect, protect and celebrate all loving families in the US. Here are highlights from a statement issued in response to Jennifer's questions:
*
The desire to build a life with a loved one, to provide for a family and to have children who will grow and thrive — these are desires that all people share, regardless of race, sex, religion, sexual orientation or gender identity.
*
But we also have to do more to support and strengthen LGBT families. Because equality in relationship, family, and adoption rights is not some abstract principle; it’s about whether millions of LGBT Americans can finally live lives marked by dignity and freedom. That’s why we have to repeal laws like the Defense of Marriage Act. That’s why we have to eliminate discrimination against LGBT families. And that’s why we have to extend equal treatment in our family and adoption laws. I’ll be a president that stands up for American families – all of them.
*
The contrast with John McCain's anti-gay sentiments straight out of the Christian Right's play book could not be more striking. Why would any LGBT citizen want to vote for McCain?
Posted by Michael-in-Norfolk at Thursday, August 07, 2008