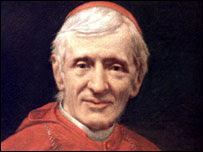 Speaking of the Roman Catholic Church, via Andrew Sullivan I learned that in possible precursor steps to the canonization of Cardinal John Henry Newman, the The Vatican has ordered that the body of Cardinal Newman be exhumed from his burial place and re-interred in a marble tomb at Birmingham Oratory which Newman founded in 1848. The reburial sounds plausible enough until one learns that Newman inconveniently shares a common burial with the one great love in Newman's life, Ambrose St John. That's right - horror of horrors - the potential saint was buried with another man as one of his final wishes. Just like something out of Brideshead Revisited. Here are some highlights of what Andrew, who was raised an English Catholic, has to say:
*
Newman and St John lived together, loved one another and even left express wishes that they be buried together. And so they were, with the tombstone etched with these immortal and elliptical words: "Out of shadows and phantasms into the Truth"
*
Whether this shared burial was a function of a deep intimacy or of a homosexual relationship in the late nineteenth century sense we do not know. But we do know that the Oxford Movement was, to put mildly, high camp as well as high church, and that Newman, like the current Pontiff, was an effeminate, delicate intellectual who had almost no real interaction with women at all and bonded mainly with younger men. St John was one such man, and Newman's and St John's deepest wishes were to be buried together for ever.
*
Now, the Vatican, nervous that this joint burial might raise questions about Newman, and always eager to insist that gay men, even celibate ones, cannot be saints any more than they can now be seminarians, is actually exhuming Newman's body and reburying it sans St John. Reburying saints is not unknown, but violating such a core last wish of this great man is definitely suspicious.
*
The BBC has more coverage on the exhumation and reburial. It is noteworthy too that the exhumation will be strictly a private affair - so no one sees the other body perhaps - while the re-entombment will be a public ceremony. All too typically, the Vatican takes hypocrisy and makes it high art. Here are some highlights from the BBC:
*
Cardinal Newman would be the first non-martyr saint in England since the Reformation, and the first British saint since the Forty Martyrs of England and Wales were canonised in one go, in 1970. . . . . John Newman founded the first English Oratory in 1848, at Maryvale in Birmingham. The Oratory has been at its present site on Hagley Road in Edgbaston since 1851. He lived a secluded life there for nearly forty years, except for four years in Ireland where he became the founder and first Rector of what is known today as University College, Dublin.
*
John Henry Cardinal Newman died at the Birmingham Oratory on 11 August 1890, from pneumonia. He was buried in the cemetery on Rednal Hill, at the Oratory Country House, and shares his grave with his lifelong friend, Ambrose St. John. . . . and the two men have a joint memorial stone, inscribed with the words he had chosen: "Ex umbris et imaginibus in veritatem", which translates as "Out of shadows and phantasms into the truth".
*
The body of Cardinal Newman, after exhumation, will be placed in a sarcophagus which will stand between the marble columns opposite the Holy Souls Altar in the Oratory Church, Edgbaston. ["Fr Chavasse said] As a great man of the Church and devoted to the Saints himself, Cardinal Newman would have been the first to insist on obeying a request of the Holy See, and he last to insist that his own personal wishes be regarded as immutable. "Hence it is that his body will not be returned to the grave at Rednal, but brought here into the Oratory Church and placed in a specially constructed sarcophagus."
Posted by Michael-in-Norfolk at Monday, August 04, 2008

Newman's androphilia is no secret. I am surprised after 120 years, this "closet" case was no such thing.

Priorly, the "Oxford Apostles," as the Tractarians were often designated, were known to be intimates, not merely as religious shared interests, but in homoeroticism. But Victorianism, being what it was, certainly did not allow or require Newman to expound of his sexual orientation.

But it does give his "discourses to mixed congregations" another level of meaning.