Archbishop of Canterbury About to Throw Gays Under the Bus? 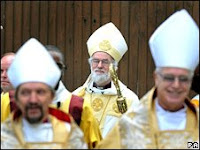 Stories out of the UK suggest that before it's all over, gays will be "thrown under the bus" in order to maintain "unity" within the Anglican Communion. As is all too typical in my opinion, the good Christians such as Archbishop Rowan Williams lack the guts to stand up against what is wrong so as to maintain false unity with bigots and false Christians. If anyone has come out looking good throughout the Lambeth Conference, I think it is Gene Robinson, the only bishop who has consistently preached a message of love and acceptance of all. I find it repugnant that Roland Williams would rather kiss the hypocritical asses of the likes of Peter Akinola (who is suggested to have had a hand in the massacre of women and children) rather than denounce them and support gay Christians. I predict that time will show that by appeasing the intolerant bigots within the Anglican Communion, Williams will be only encouraging them to make further demands. Are women priests and bishops the next targets of the homophobic male chauvinists that predominate the ranks of the "conservative" bishops. Williams is the religious equivalent of Neville Chamberlain appeasing Hitler. Here are some highlights from the BBC:
*
The announcement came on the last day of the Lambeth Conference, which has been overshadowed by the issue of gay clergy and same-sex unions. About 200 bishops boycotted the once-a-decade forum over the row. Dr Rowan Williams said there was a recognition, "though still with many questions", that a Covenant was needed. The BBC's Robert Pigott says this would be "some sort of statement of shared beliefs and a more-or-less binding agreement to stick to them".
*
"It seems that a number of groups of clergy have voted for a ban on gay bishops and church blessings for homosexual couples, as part of a long-term plan to preserve at least the core of the Communion," he said. One suggestion from the group working on a potential Covenant has been for churches departing from tradition to have "diminished status" within the Communion. Such an arrangement would result in a two-tier Communion but no church would be expelled.
*
Gene Robinson - told Radio 4's Sunday programme that some traditionalists were actively working towards schism. "Bullies always come back for more. And the one thing that I think the archbishop is blind to is the fact that nothing short of total victory will satisfy these guys."
Posted by Michael-in-Norfolk at Sunday, August 03, 2008