Right Gears Up to Fight “Armageddon of the Culture War” 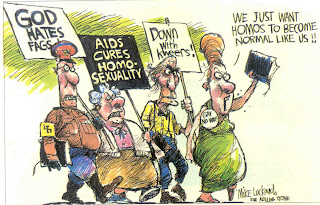 Right Wing Watch has an piece on the battle taking shape in California over Proposition 8 and how for two hours on Wednesday afternoon, July 30, 2008, pastors gathered at 215 sites in California, Arizona, and Florida were exhorted by national Religious Right leaders and local anti-gay pastors to spare nothing in the cultural and spiritual war against Satan and his allies who support marriage equality for gay and lesbian couples. National figures included Tony Perkins, Harry Jackson, Maggie Gallagher, and Chuck Colson.
*
The primary focus of the call was Proposition 8 in California, described by convicted Watergate felon, Chuck Colson (who I view like so many in the Christian Right as an opportunistic charlatan who used a phony religious conversion experience to set him self up with a comfortable income), as “the Armageddon of the culture war.” Not surprisingly, the Roman Catholic Church which has done NOTHING to discipline bishops and cardinals involved in cover ups in the sex abuse scandal, is involved peddling an anti-gay message. I believe that defeating Proposition 8 is absolutely critical because not only will in ensure that ultimately marriage equality will spread nation wide in the USA, but also because it may be the Christianits' Waterloo. If they lose this battle, it may be the beginning of their banishment back to the political and societal wilderness where they belong. Here are some highlights from the RWW bulletin (note how nowhere in the diatribes do these alleged Christianis even acknowledge the humanity of gays):
*
Pastors from around the state, and those representing African American, Latino, and Chinese congregations, reported on their mobilization efforts. Bishop Salvatore Cordileone, auxiliary bishop of the diocese of San Diego, pledge the support of the Catholic Church and said the state conference of bishops would be providing congregations with organizing resources and urging parishioners to take part in the broader campaign. Organizers said that they are “blessed to have the full support of the LDS church” – which will help identify anti-equality voters in 21,000 precincts in August.
*
While complaining about opponents of the proposition “raising millions of dollars from wealthy gay Americans,” campaign organizers said they have already raised $15 million of their minimum $23 million budget and have plans for special offerings to be taken in churches around the country.
*
Rev. Dudley Rutherford, predicted that if Prop. 8 fails, the God-ordained institution of marriage would be destroyed; the engine of hate crimes legislation would be fueled, ultimately leading to it being illegal to read some sections of the Bible; the floodgates would be open to gay couples suing to force churches to marry them; and the polygamists would be next.
Posted by Michael-in-Norfolk at Sunday, August 03, 2008