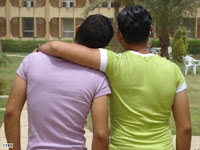 I am a day or two behind on this story, but believe that it is important in that if the legal reasoning holds up - and I believe it is sound - then there will be married gays in California no matter the out come of the vote on Proposition 0 in November. Thus, the Christianists horror of gay marriage being referenced in school, especially government classes, will be guaranteed. What am I talking about? the fact that California Attorney General, Jerry Brown, poked a big hole in the Christianists' balloon with the release of an opinion that concludes that marriages performed before November 4th would continue to be valid even if Proposition 8 were to pass. Thus, thousands of same-sex marriages would continue to exist. This is for two reasons: (1) most legislation is effective from the date of passage and (2) under the U.S. Constitution there are bans against abrogation the right of contracts and ex-post facto laws. Here are highlights from the San Francisco Chronicle on Brown's opinion Also note how the corrupt and hypocritical Catholic Church is supporting Prop. 8 rather than focusing on cleaning its own disgusting dirty linen):
*
If voters approve a November ballot measure banning same-sex marriages in California, thousands of gay and lesbian weddings conducted since the state Supreme Court legalized the unions on May 15 will probably remain valid, Attorney General Jerry Brown said Monday. . . . Brown's position is significant because his office will represent the state in lawsuits over Prop. 8's validity and meaning if it passes.
*
Brown's office said in a court filing Monday that he believes the ballot measure would not invalidate existing marriages. "I believe that marriages that have been entered into subsequent to the (May 15) Supreme Court opinion will be recognized by the California Supreme Court," Brown told The Chronicle. Noting that Prop. 8 is silent about retroactivity, he said, "I would think the court, in looking at the underlying equities, would most probably conclude that upholding the marriages performed in that interval (before the election) would be a just result."
*
Brown defended his ballot language as neutral and accurate Monday, while opponents of Prop. 8 pressed their challenge to a section of the Yes on 8 argument. That argument declares that teachers will be required to tell students as early as kindergarten that "gay marriage is OK" unless the ballot measure passes, a claim that the No on 8 campaign calls baseless.
*
n another development Monday, the California Catholic Conference, representing Catholic bishops, endorsed Prop. 8, declaring that "same-sex unions are not the same as opposite-sex unions" and that only a relationship that can produce children should be called marriage.
*
I guess per the Catholic Church all marriages of childless couples need to be voided.
Posted by Michael-in-Norfolk at Thursday, August 07, 2008

Just last weekend - Saturday - two friends of mine from here in DC were married in Los Angeles. They've been together for six years and for them marriage was something that means a great deal. From conversations with them, the whole process was very easy and the City of West Hollywood was very accommodating and supportive. They were married by the Mayor. From what my friends have told me they are encouraged about the chances of defeating Prop 8 based on their experience. On the other hand, it was West Hollywood so we'll see. Let's hope that the religious right will fail this time.