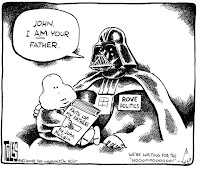 My total disgust with John McCain just seems to get worse by the day. A new ad that McCain is running contains code words from the "Left Behind" book series written by the husband of Concerned Women [read Bitches] for America founder, Beverly LaHaye, and stoops to new all time low and tries to signal that Barack Obama is the Anti-Christ. Personally, my nominees for that title would include some of the leading Christianists such as James Dobson for example. Haven't we learned from the Chimperator that anyone who is utterly in bed with the Christianists is not dealing with a full deck mentally? They are the ones who seem to think they are God, not Obama and one need only look to the Iraq debacle to see where that has led the country. Here's what Pam Spaulding says about this new level of sleaze:
*
Are you a Democrat? Are you an Obama supporter? If so, you probably didn't read the "Left Behind" series, and you might not even recognize these code words:
"The One"
"Anointed Himself"
*
These are phrases about the Antichrist. So who would use this tactic against an opponent? Why, the Straight Talk Express!
*
This is brilliant: It not only allows the campaign to say something vile about Obama with "plausible deniability", it also plays on the fears of the deeply religious!
*
Deeply religious? How about deeply insane. Here's some highlights from what CNN is reporting on this disgusting tactic which in my view is beyond the pale and shows that McCain is unworthy of the presidency (I truly want to vomit and see no humor in this ad whatsoever. First an ad that is a total lie and now this. McCain is the Chimperator all over again):
*
(CNN) – After a week of bare-knuckle political brawling on the trail, it seemed Friday John McCain’s campaign had found religion. In a Web ad e-mailed to supporters, the McCain team painted Barack Obama as a recipient of near-messianic hype – and a candidate all-too-willing to believe it.
*
“It shall be known that in 2008 the world will be blessed. They will call him ‘The One,’” says the announcer in the minute-long video, over images of light shining from the heavens and a gospel music-like soundtrack, . . . “And he has anointed himself. Ready to carry the burden of The One,” continues the announcer. “He can do no wrong. Can you see the light?”
*
Wallace added that the ad – which she described as respectful of all faiths — was intended to rally the presumptive Republican nominee’s supporters, and that there was an "important role for humor in all campaigns. I think all of us would slit our wrists if it wasn't for that."
Posted by Michael-in-Norfolk at Sunday, August 03, 2008