This past Sunday the Gay Pride Parade took place in Vancouver, British Columbia, a city that I truly loved when visiting with my son. What is amazing is the size of the turnout - 530,000 according to the Vancouver Sun. That number is equal to 1/3 of the entire population of the Hampton Roads area of Virginia. If that many gays and gay supporters turned out down here, Pat Robertson would probably either go catatonic or launch into a full blown conniption fit. This area remains such a backwater in terms of diversity and acceptance of those who are different, The Ghent area of Norfolk where I live is the exception to the norm here. Here are highlights from the Sun's coverage:
*
VANCOUVER - The 30th annual Pride Parade "broke a lot of records," the president of the Vancouver Pride Society said, as nearly 530,000 people came out to the West End on Sunday. . . . . "There are more families, kids and tourists," he said. "I'm proud of the support this community is receiving."
*
He [the president of the Pride Society] said he was very happy that 100,000 participated in the beach festival, while 7,000 people were in the parade itself. The procession included 164 parade entries, representing more than 200 organizations and businesses.
*
During the parade, screams praising one of the grand marshals, Sahran Abeysundara, made the Sri Lankan break into tears, Boychuk said. "In his country you can go to jail for being gay," Boychuk said. "Be proud to be Canadian. I am."
*
I'd be proud to be a Canadian too - I just need to find employment and/or a nice guy from BC to marry me. We stayed in a hotel during our visit not too far from the intersection pictured in the photo above. Below is a photo of Nanaimo on Vancouver Island where the ferries from the mainland arrive from Vancouver. My son and I sailed into that harbor on our wonderful trip to BC. 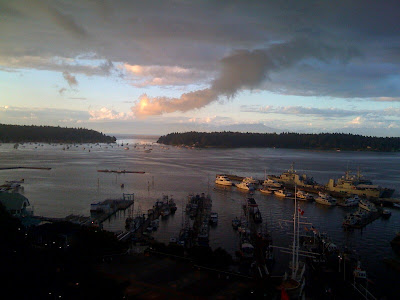 Posted by Michael-in-Norfolk at Wednesday, August 06, 2008