Politicians and the Lies That Matter 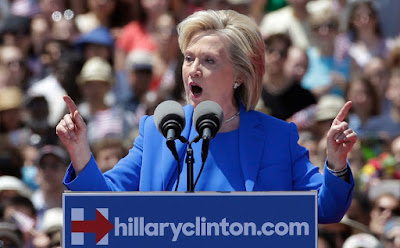 One of the ironies of the 2016 presidential contest is that voters who don't like Hillary Clinton repeatedly justify their view by saying she is "not trustworthy."  Meanwhile many of these same people are backing Donald Trump who has been documented to be lying nearly all of the time on a huge array of issues.  The obvious conclusion is that these anti-Hillary, pro-Trump folks have their heads up their asses in a serious way and are either as delusional as Trump himself or motivated by one of the resentments that Trump is fanning.  In short, they are as untruthful as Trump himself whether or not they care to admit it and take a long look at themselves in the mirror.   A column in the New York Times looks at the difference between Hillary Clinton's "lies" and the shocking and persistent untruths that Trump utters every time he opens his mouth.  The piece also looks at the lack of truth and veracity coming from the mouth of the egomaniac, Bernie Sanders. Here are excerpts:

I rise this week in defense of Hillary Clinton.

I see from polls that Hillary scores very low on “trustworthy” questions. Well, let’s talk about truth in politics. All politicians shade the truth at times. Some do it more than others. Indeed, when Donald Trump tells the truth, it should be labeled “Breaking News — Trump tells truth without immediately contradicting himself. We’re going live to the scene right now.”

Here is what is relevant: Lying is serious business. But Hillary’s fibs or lack of candor are all about bad judgments she made on issues that will not impact the future of either my family or my country. Private email servers? Cattle futures? Goldman Sachs lectures? All really stupid, but my kids will not be harmed by those poor calls. Debate where she came out on Iraq and Libya, if you will, but those were considered judgment calls, and if you disagree don’t vote for her.

But while Hillary’s struggles with the whole truth on certain issues have garnered huge attention, driving up her negatives, Trump and Bernie Sanders have been getting away with some full Burger King Double Whoppers that will come crashing down on the whole country if either gets the chance to do what he says.

Trump told a biker rally in Washington on Sunday: “When you think of the great General Patton and all our generals, they are spinning in their graves when they watch we can’t beat ISIS. … We are going to knock the hell out of them.” Then, for good measure, he repeated his longstanding call to build a wall along the Mexican border, and when he asked who would pay for it, the crowd shouted in unison: “Mexico!” Trump added, “Not even a doubt.”

Really, not even a doubt? Why hasn’t President Obama been a “real man” and just carpet-bombed ISIS off the face of the earth? Answer: 1.) ISIS is embedded in urban areas, among Iraqi and Syrian civilians, so we can’t carpet-bomb the terrorists without killing all the civilians around them. 2.) If Obama sent the 82nd Airborne into Mosul and wiped out ISIS, after horrific door-to-door fighting, the morning after the battle we would own Mosul, because there is no agreement among Sunni tribes there, let alone the Kurds, Shiites and neighboring Turkey, over who should control Mosul post-ISIS.

It’s called being strategic and General Patton would be applauding from his grave.

On Mexico, please tell me why it would pay for a multibillion-dollar wall on our border and how we would compel our neighbor to do so and what impact that would have on U.S. companies? To act as if those are not even issues is fraud.

Trump’s tax plan? The nonpartisan Tax Policy Center estimates that it would decrease tax revenues over 10 years by $11.2 trillion, and since Trump has ruled out entitlement cuts, he would need to slash all discretionary federal spending by 80 percent — that’s where the defense, research and education budgets come from. This is not just magical thinking, it’s nonsense, and if Trump implemented half of it, your kids would pay dearly.

As for Sanders, he is promising to break up the big banks. Under what legal authority? What would be the economic fallout? And how would this raise stagnant incomes for middle-class Americans? Bernie mumbles on these questions.

The Tax Policy Center said in a study of Sanders’s full economic plan, including free health care, with no premiums or co-pays, and free college education, more generous Social Security benefits and 12 weeks of family leave, “Even though Sanders would raise taxes on nearly all households by a total of more than $15 trillion over the next decade, his plan still would add an additional $18 trillion (plus at least $3 trillion in interest) to the national debt over the period” and thereby “create an enormous fiscal challenge.” Even eliminating the defense budget wouldn’t come close to balancing his books.

All lying in politics is not created equal. I think the ideology Bernie is selling is fanciful, but underlying it is a moral critique of modern capitalism that has merit and deserves to be heard. But Bernie is not being truthful about the costs. What is grating about Hillary is that her prevarications seem so unnecessary and often insult our intelligence. But they are not about existential issues. As for Trump, his lies are industrial size and often contradict each other. But there is no theory behind his lies, except what will advance him, which is why Trump is only scary if he wins. Otherwise, his candidacy will leave no ideas behind. It will just be a reality TV show that got canceled.

I wish we had better choices, but given the options, I’d vote for the candidate who is most likely to be a practical unifier and get some things done — and who only tells whoppers about herself, not about my country’s future.