Trump Has Taught Me to Fear My Fellow Americans 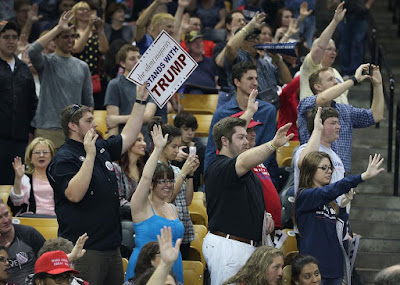 If one is a LGBT American, one knows all too well that hate and bigotry that continues to flourish in America, particularly among those who see themselves as "godly Christians" and to a lesser extent "patriotic Americans." The hatred at times is palpable and we gays know what it is like to fear for our safety at times simply because of who we are. With the rise of Donald Trump and so-called Trumpism, more Americans are coming to grasp just how prevalent hate and bigotry is in America. Yes, the GOP has fostered racism and homophobia for years as a means to rally the bigoted to the polls, but with Trump, we are seeing something far more blatant and willingness to use threats of violence against those deemed "other."  A column in the Washington Post looks at the phenomenon and just how scary some of our fellow countryman are in fact.  Here are column excerpts:

What word comes to mind when you see the name Donald Trump? For some people, it might be “anger,” since he provokes it and stokes it. For others, it might be “ignorance,” since he knows so little and, like many unburdened by knowledge, is untroubled by facts. Some might say “fear,” since it would take some scary police tactics to push 11 million people over the border to Mexico. For me, none of those words suffices. I would say “betrayal.”

It is the word that comes to mind almost on a nightly basis when I see some Trump surrogate defend Trump’s positions on one of the cable news shows. How can you? I want to ask. Do you believe that the government should apply a religious test to let people into this country? Christians? Yes. Jews? Sure. Buddhists, Hindus and Zoroastrians, step this way. Muslims, not so fast.

I can abide policy differences but I cannot abide indifference to bigotry. And neither should any of Trump’s supporters.

I felt that same, awful feeling of betrayal when Trump mocked a physically disabled reporter for the New York Times. Did Trump’s people notice? Did they care? Aren’t Americans supposed to stick up for one another?

Donald Trump has taught me to fear my fellow American. I don’t mean the occasional yahoo who turns a Trump rally into a hate fest. I mean the ones who do nothing. Who are silent. Who look the other way. If you had told me a year ago that a hateful brat would be the presidential nominee of a major political party, I would have scoffed. Someone who denigrated women? Not possible. Someone who insulted Mexicans? No way. Someone who mocked the physically disabled? Not in America. Not in my America.

When I see these Trump supporters on television — the commentators, the Politician’s Puttanesca (a dish to poison the body politic) — I have to wonder where they would draw the line. The answer seems to be: nowhere.

Muslims and Mexicans are merely collateral damage in a war that must be fought. What about blacks or Jews? Not yet.

Maybe the talking heads on TV would draw the line at some mild version of fascism, but would the American people do the same? Here, I must hesitate. The easy yes of yesteryear has given way to awful doubt. Trump could win. . . . When Trump insisted that he could compel a military officer to obey an illegal order, I heard the echo of jackboots on cobblestone.

History nags. It admonishes. “American exceptionalism” is a phrase that refers to the past, not necessarily the future. Nothing is guaranteed. I’d like to think that Americans really are exceptional, that we have an exceptional faith in democracy and the rule of law. I now have some doubt. I always knew who Trump was. It’s the American people who have come as a surprise.

With Donald Trump set to meet this month with a who's who of the leaders of anti-gay hate groups, I cannot help but wonder if gays will be added to Trump's list of enemies of :real Americans."  It is indeed frightening.