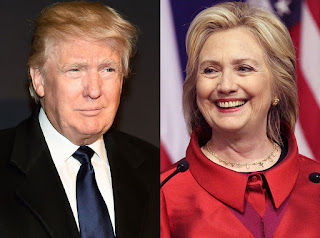 As I watch Donald Trumps surge and Republicans who I once believed had some minimal level of sanity and decency swear fealty, I wonder if this is how thinking, moral Germans felt in the late 1920's and early 1930's as Hitler rose to power.  Did they too wonder how their countrymen - and neighbors - became so fueled by hate and resentment that they were willing to put a narcissistic egomaniac who had no background to lead the nation into office? I continue to believe that we are living in a very dangerous time and that America could become an unrecognizable horror story if Trump and his forces are not stopped.  That said, a piece in Politico looks at four things that Hillary Clinton needs to avoid doing if she is going to defeat Trump in November.  Here are article excerpts:

If Clinton pushes away some of her potential supporters; fails to energize others to vote; and fires up Trump’s base by pandering to her own—well, she just might be able to make the numbers work out for him. If he does pull off the election of the century, Trump’s path to 270 Electoral College votes will begin with 164 practically in the bank, from 21 solid-red states generally considered sure things for the Republican nominee. And here’s how Clinton could push more than enough additional states onto Trump’s side of the ledger—Florida, Ohio, Pennsylvania, New Hampshire, Iowa, Virginia, Colorado, Nevada, Arizona, Wisconsin, Michigan—one mistake at a time.

It’s been a matter of faith in Democratic circles: Trump’s grotesque demonization of Latin-American immigrants will boost Hispanic turnout and Clinton’s share of their vote. As a result, you’re already hearing a lot less about Housing and Urban Development Secretary Julián Castro, once the odds-on favorite to become Clinton’s vice presidential running mate. Castro was supposed to be part of a big Democratic push for Hispanic votes this year. Now, the thinking seems to be, those votes will take care of themselves.

A new Fox Latino poll shows Clinton leading Trump by an impressive-sounding 39 points: 62 to 23. But there’s a problem: That 39-point spread is actually less than the 44 by which Barack Obama beat Mitt Romney in 2012.

Yes, their numbers are growing. But Hispanics simply don’t like Clinton nearly as much as they like Obama: Her favorable/unfavorable is a net +15 in that Fox Latino poll, while Obama’s is +46. Colorado, where the fast-growing Hispanic population gave 75 percent of its vote to Obama in 2008, is a similar story to Florida. So is Nevada, where all of the major analysts still rate the Senate race between Republican Joe Heck and Democrat Catherine Cortez Masto a tossup—suggesting that they aren’t yet foreseeing a torrent of Democratic-voting Hispanics rush the polls in November.

Oh, and did we mention that Hispanic voters are disproportionately young—a staggering 44 percent of eligible Hispanic voters this year are millennials, compared with 27 percent of non-Hispanic whites, according to Pew—and that Sanders has been pulling large numbers of them away from Clinton, just as much as others their age.

Millennials, being both more numerous and less cynical than their Generation X predecessors, once seemed likely to usher in a substantial advantage for Democrats among young voters. Except then they stopped turning out. In 2012, the number of 18-to-29-year-old voters dropped by 1.8 million from the previous presidential election year. “It seems likely that the observed young-adult voting surge of 2004–2008 was temporary,” a U.S. Census study concluded, “and not representative of a permanent shift towards greater young-adult engagement in presidential elections.”

In 2016, this is likely to affect Clinton’s performance in several college-heavy states that have had relatively high turnout—and high Democratic voting rates—among those age groups. That includes swing states such as Iowa, North Carolina, New Hampshire and Virginia.

To see how much young-voter turnout matters, look at North Carolina. In 2008, Obama had a net advantage there among 18-to-29-year-olds of 368,000 votes—and eked out a 14,000-vote victory overall. In 2012, with dampened enthusiasm, Obama’s advantage in that age group dropped by 120,000, and Romney coasted to a 92,000-vote win. What’s more, those young voters are especially likely to be swayed to third-party alternatives, which—see below—could become more enticing this time around.

The key to a Clinton landslide is turning red voters blue. And once it became clear that conservatives didn’t have the guts to put forward a #NeverTrump protest candidate, “Republicans for Hillary” was beginning to have a bit of a ring to it. But there’s another possibility: A plausible moderate-right candidate could emerge as a genuine alternative.

Take, for example, former Massachusetts Republican Governor Bill Weld, whose history with Clinton goes back decades. Weld is exactly the type of GOP moderate Clinton has reportedly been wooing as Trump edged closer to the nomination. He endorsed Obama in 2008. He compares Trump’s rhetoric to Nazism. And there are plenty of Republicans like him this year, particularly in the Northeast. Not too many years ago, you could imagine considerable appeal for Clinton among Weld-ian Republicans. But thanks to her primary run, a combination of issues—Sanders pushing her left on economic issues, her unsatisfactory answers on the email scandal—has made that a tougher sell.

As soon as the votes were tallied in 2012, Richard Trumka of the AFL-CIO and Mary Kay Henry of SEIU were claiming unions had delivered Obama’s victory. They argued, with justification, that Ohio, Wisconsin and Nevada got into the blue column because of a massive turnout effort from labor. But earlier this year, both Trumka and Henry expressed concerns that Trump could flip that script.

“Our members are responding to Trump’s message,” Henry said in one interview. “Donald Trump is tapping into the very real and very understandable anger of working people,” Trumka said in a speech.

It’s not just that these workers are drawn to the raw emotion of Trump’s “you’ve been screwed” rhetoric. Polls show that union households tend to oppose free trade quite strongly. Sanders has made free trade a centerpiece of his primary campaign against Clinton. Trump, hoping to woo Sanders voters, frequently praises his position on that issue.

Union voters largely agree with Trump that trade deals—including those negotiated by Democratic Presidents Obama and Bill Clinton—have taken their jobs away. Hillary Clinton has yet to counter this attack in any meaningful way. Her history on trade has been careful and political, which has left her struggling to articulate a strong argument against Sanders, let alone Trump. The Final Tally

It’s not hard to see how quickly this could start costing her Electoral College votes in the Rust Belt, where Trump hopes to improve on past Republican performance. (And where, you may remember, Clinton had to apologize for threatening to put coal companies out of business.) In Ohio, for example, 22 percent of 2012 voters came from union households, and 60 percent of them voted for Obama. In Wisconsin, a similar share of the electorate voted 2-to-1 for Obama over Romney. In 2016, both states went for Sanders over Clinton in their primaries. In Pennsylvania, where Trump is planning a major effort, union households provided Obama more than half his net margin.
For what it’s worth, it’s also possible Clinton wins in a landslide, as an increasingly unstable Trump shrinks deeper and deeper into racism, xenophobia and conspiracy theories. But what’s clear is that Democrats can no longer count on a lopsided race that even a problematic candidate running a clumsy campaign can’t lose.

Again: It’s a long way to November, and Trump could always self-destruct. But he probably won’t, and 2016 is shaping up as a contest that a careful Clinton campaign can easily lose, state by state, even as she piles up the popular vote in California and other sure-win places. Demographics are not destiny. In fact, they can be a disaster waiting to happen.