The Federalist: Vote For Hillary, Not Trump 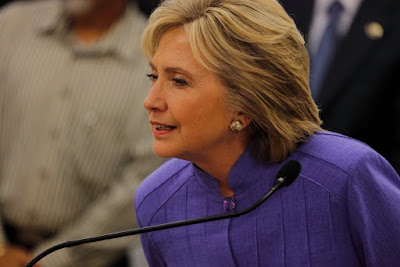 While far too many self-styled "conservatives" - a label they prefer over racist, nativist, religious extremist or shameless, greed motivated opportunist - are pledging loyalty to Donald Trump, there remain some true conservatives who are shocked and appalled at what Trump is doing to conservationism.  These true conservatives would rather see Hillary Clinton in the White House rather than a Trump presidency which they view as akin to the Visigoths sacking Rome at the fall of the western Roman Empire.  A column in The Federalist - not exactly a liberal outlet - makes the case of why it is important that conservatives vote for Hillary Clinton and keep Trump from the presidency.  Here are column excerpts:

[The] most important reason to vote for Hillary is this: she is not Donald Trump. Rather than dance around it, it is more worthwhile to simply make the case that Trump is radically unsuited for the presidency and should be kept from it at all costs.

Perhaps more than anything, Trump’s serial lying makes him unworthy of your vote if for no other reason than this: if you’re voting for him because of his position on a certain issue, you can be virtually certain he is lying about it in some way. He simply cannot be trusted.

3. Donald Trump Promotes Political ViolenceTrump has brought disgrace upon the presidential primary process by inciting and promoting violence throughout his campaign. At a rally in Missouri earlier this year,Trump lamented that “nobody wants to hurt each other anymore.” At another rally he tacitly encouraged violence against protestors: “If you do [hurt them], I’ll defend you in court.” In Las Vegas he said of a protestor: “I’d like to punch him in the face.”

Let’s be brutally honest: a man who pits Americans against one another—who encourages American citizens to hit, punch, and strike each other, as well as destroy property and cause domestic mayhem—has disqualified himself from being considered for president. He is not fit to be even a clerk at a city council meeting. This is a stain upon the American ethos and a debasement of our political system. And Trump revels in it.

4. Donald Trump Is a Gleeful and Unrelenting Debaser of WomenThese days we’ve become used to the usual feminist shrieking every time a man says something they don’t like. We’re all sick of liberals wining about “male privilege” and the “War on Women.”

But Trump is different: he is historically crude, mean, nasty, and wholly ungentlemanly towards women. . . . Regarding Trump’s philosophy of women, the man himself claimed: “You have to treat ‘em like shit.”

This is, once again, a disgrace, a political and a societal stain on our country. One of the problems our society faces today is an astonishing lack of gentlemen: a great many young men of my generation have forgotten how to be courteous, respectful, attentive, and kind towards women. We need a gentleman’s renaissance in this country—a revitalization of chivalry—and the last thing that will help such a project is a Donald J. Trump presidency. He would encourage countless young men to be simply terrible towards women.

5. Donald Trump Is An Unabashed Flip-FlopperOver a decade ago, Republicans rightly derided John Kerry for flip-flopping on a great many important political issues. Yet now the GOP is poised to nominate a man who is just as bad as Kerry, if not worse. . . . .  these are major policy considerations that Trump just cannot make up his mind about. At best, we can assume that he is simply very stupid and incapable of forming a coherent position on these critical issues. At worst—and far more likely—he is simply willing to change his position on any given issue whenever it suits him. How could we trust him on anything once he was in the Oval Office? The answer is simple: we could not.

6. Donald Trump Is Avowedly Anti-Free SpeechTrump’s opposition to Citizens United is not the only indication that he is anti-free speech. He has vowed, once in office to “open up” libel laws to make it easier to sue newspapers that write negative things about him. Taking a cue from Trump’s demonstrable hostility to free speech, Roger Stone said that, as president, Trump should “turn off CNN’s FCC license.”

Years ago, an author wrote some critical things about Trump; Trump sued him not because he had a legitimate grievance but simply “to make his life miserable.” Frivolous, expensive lawsuits are a common tactic people use to censor their critics. This is what Trump does; he admits it, proudly and unabashedly.

Trump is signaling to the American people that he is pro-censorship and anti-free speech. Free speech is one of the most precious, inestimable civil rights in the United States Constitution. To hand over the executive branch to a man so manifestly opposed to the First Amendment would be catastrophic.

7. Donald Trump Could Ruin the Reputation of Conservatism[B]ecause Trump is an unreliable, abrasive, and egomaniacal crackpot of a politician, he could do serious damage to American conservatism simply because people will come to associate conservatism with Trump.

Just think: in addition to all the insane, cruel and unbalanced behavior listed above, Trump entertained and promoted wild-eyed conspiracy theories about Cruz’s father; he intimated that Mexico is “sending” rapists to the United States; he mocked a decorated war veteran for being captured by enemy forces; he called for banning the entirety of Muslim immigration to the United States; he promoted the idea that Jeb Bush’s immigration policies were inspired by Bush’s wife’s ethnicity; he indirectly praised the Chinese government for the Tiananmen Square massacre; he stoked fears that Supreme Court Justice Antonin Scalia was murdered; he openly and gleefully mocked a journalist with a physical disability; and he has in general comported himself with narcissism, self-aggrandizement, vanity, and deliberate boorishness.

A man like this—a man with these psychological hang-ups, these awful tendencies, and this kind of reckless behavior—would do incredible if not fatal damage to American conservatism.

Clinton Is Horrible; Trump Is WorseThere is no good reason to vote for Donald Trump. There is not a single, solitary good reason to cast your ballot for this dangerous and unstable person.  . . . . the principal electoral purpose of the 2016 campaign season, for every good and decent American, should be keeping Donald Trump out of the White House. The best bet for doing that? Voting for Hillary Clinton.

It should be clear at this point that I think Hillary Clinton would be a bad president. She would probably even be a terrible one. But she would also be what Trump is not: predictable, arguably sane, able to be reasoned with to a certain degree, unlikely to order soldiers to torture and kill women and children, and so forth.

Under Hillary Clinton our country would probably get poorer, less pleasant, and less free. But under Trump all of these things would still happen—and we would have the added horror of being ruled by a strongman with a quick temper, an insanely delicate ego, and a penchant for inciting violence. Plainly, Hillary is the better and safer option of the two.

Trump is a man unfit for any office. He is dangerous, he is reckless, and his candidacy should scare us all. . . . Now there is only one person with any hope of keeping Trump out of the White House. Her name is Hillary Clinton. And you should vote for her in November.