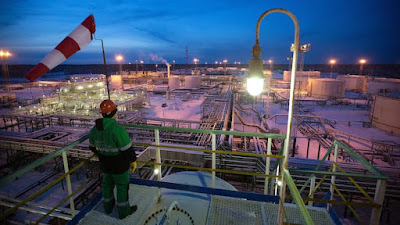 In a recent editorial the august Financial Times had a message for international oil industry: the hand writing is on the wall: accept your own decline and either diversify or retain capital to your shareholders.  With climate change a growing international concern, compliance with new regulations will significantly curtail the demand for oil and oil products.  Indeed, the trend has already begun and with falling demand in the West, prices remain historically low and exploration projects have been curtailed.  For too many decades, American and European foreign policy has been focused on keeping oil supplies flowing from the perpetually unstable Middle East.  But for oil and the delusions of the Bush/Cheney regime, the Iraq War and its ensuing unintended consequences might not have occurred. Frankly, the hasten demise of reliance on oil could make the Middle East increasing irrelevant - something that would be a true positive.  Here are editorial highlights:

The annual meetings of some of the world’s largest oil companies this week were like therapy sessions for an industry that is suffering from existential angst. The international objective of holding the increase in global temperatures to “well below” 2C, agreed at the Paris climate talks last year, implies the obsolescence of all fossil fuel production within the next few decades. The oil companies have not yet reconciled themselves to quite what this means.

If governments stick to that commitment, fossil fuel companies will either have to find ways to stop greenhouse gas emissions from their products, or shift into renewable energy, or go out of business. At the annual meetings of oil groups including ExxonMobil and Royal Dutch Shell, that prospect was argued over by executives and shareholders, without conclusive result.

In their public presentation, at least, the European groups including Shell and Total are more willing to face up to the threat of climate change than their US rivals.

One option for escaping those limits is for the big oil companies themselves to take part in the energy transition. Total, which has the most ambitious plans for diversification, has set a goal of having 20 per cent of its assets in low-carbon energy by 2035.

The commitments made by Chevron, BP and most other groups to maintaining their dividends during the downturn, even if they have to borrow to do so, is an encouraging acknowledgment of that reality, even if the companies do not put it in those terms.

Instead of railing against climate policies, or paying them lip-service while quietly defying them with investment decisions, the oil companies will serve their investors and society better if they accept the limits they face, and embrace a future of long-term decline.