Donald Trump And the Growing Debate Over Global Fascism 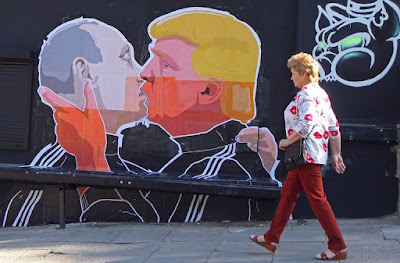 Donald Trump's message of racism, scapegoating and dangerously aggressive nationalism did not arise in a vacuum.  There are real problems in this country, especially the soar wealth inequalities and and the pummeling of the middle class, but a turn to fascism is not the answer.  Yes, there is a simplicity to blaming certain groups or other countries for economic misfortunes that removes the need for hard thought and analysis - something always shunned by the Christofascists and white supremacists rallying to Trump - but history has shown the dangers this path leads to.  Tellingly, while Trump yells about "making America great again," similar political posturing is taking place in other parts of the world, including Russia and portions of Europe.  For those targeted as "other" or the "enemy" these are frightening times.  Given trump's courting of the ugliest elements of the anti-gay Christofascists, perhaps I am more frightened than some.  A piece in the New York Times looks at the disturbing global trend. Here are excerpts:

WASHINGTON — The comparison was inflammatory, to say the least. Former Gov. William F. Weld of Massachusetts equated Donald J. Trump’s immigration plan with Kristallnacht, the night of horror in 1938 when rampaging Nazis smashed Jewish homes and businesses in Germany and killed scores of Jews.

But if it was a provocative analogy, it was not a lonely one. Mr. Trump’s campaign has engendered impassioned debate about the nature of his appeal and warnings from critics on the left and the right about the potential rise of fascism in the United States. More strident opponents have likened Mr. Trump to Adolf Hitler and Benito Mussolini.

To [Trump] supporters, such comparisons are deeply unfair smear tactics used to tar conservatives and scare voters. For a bipartisan establishment whose foundation has been shaken by Mr. Trump’s ascendance, these backers say, it is easier to delegitimize his support than to acknowledge widespread popular anger at the failure of both parties to confront the nation’s challenges.

But the discussion comes as questions are surfacing around the globe about a revival of fascism, generally defined as a governmental system that asserts complete power and emphasizes aggressive nationalism and often racism. In places like Russia and Turkey, leaders like Vladimir V. Putin and Recep Tayyip Erdogan employ strongman tactics. In Austria, a nationalist candidate came within three-tenths of a percentage point of becoming the first far-right head of state elected in Europe since World War II.

In Hungary, an authoritarian government has clamped down on the news media and erected razor wire fences to keep out migrants. There are worries that Poland may follow suit. Traditional parties in France, Germany, Greece and elsewhere have been challenged by nationalist movements amid an economic crisis and waves of migrants. In Israel, fascism analogies by a former prime minister and a top general have again inflamed the long-running debate about the occupation of Palestinian territories.

In many countries, middle-class wages are stagnant and politics has become a battle over a shrinking pie. Populists have replaced contests between left and right with a struggle between cosmopolitan elites and angry nativists.”

That dislocation may not lead to a repeat of Europe in the 1930s, but it has fueled a debate about global political trends. There is a tendency at times to try to fit current movements into understandable constructs — some refer to terrorist groups in the Middle East as Islamofascists — but scholars say there is a spectrum that includes right-wing nationalism, illiberal democracy and populist autocracy.

Americans are used to the idea that other countries may be vulnerable to such movements, but while figures like Father Charles Coughlin, the demagogic radio broadcaster, enjoyed wide followings in the 1930s, neither major party has ever nominated anyone quite like Mr. Trump.

“This could be one of those moments that’s quite dangerous and we’ll look back and wonder why we treated it as ho-hum at a time when we could have stopped it,” said Robert Kagan, a scholar at the Brookings Institution known for hawkish internationalism.

Fascist comparisons are not new in American politics. . . . . But with Mr. Trump, such comparisons have gone beyond the fringe and entered mainstream conversation both in the United States and abroad.

Mr. Trump has provided plenty of ammunition for critics. He was slow to denounce the white supremacist David Duke and talked approvingly of beating up protesters. He has praised Mr. Putin and promised to be friends. He would not condemn supporters who launched anti-Semitic blasts at journalists. At one point, Mr. Trump retweeted a Mussolini quote: “It is better to live one day as a lion than 100 years as a sheep.”

Mr. Paxton, the fascism scholar, said he saw similarities and differences in Mr. Trump. His message about an America in decline and his us-against-them pronouncements about immigrants and outsiders echo Europe in the 1930s, Mr. Paxton said. On the other hand, he said, Mr. Trump has hardly created uniformed, violent youth groups. Moreover, fascists believe in strong state control, not get-government-off-your-back individualism and deregulation.

“Historically, it means the demonization of minorities within a society to the extent that they feel insecure,” he said. “It means encouraging the use of violence against critics. It means a bellicose foreign policy that may lead to war, to excite a nationalist feeling. It takes xenophobia to extremes. And it is contemptuous of a rules-based liberal order.”

The debate about terminology may ignore the seriousness of the conditions that gave rise to Mr. Trump and his European counterparts. The New York real estate developer has tapped into a deep discontent in a country where many feel left behind while Wall Street banks get bailouts, newcomers take jobs, terrorists threaten innocents and China rises economically at America’s expense.

“We are seeing a new kind of phenomenon which is different from what you had” in the 20th century.  Roger Eatwell, a professor at the University of Bath, in England, calls it “illiberal democracy,” a form of government that keeps the trappings of democracy without the reality.

Lilia Shevtsova, a political analyst in Moscow, said neo-fascism in liberal societies in the West stems from crisis or dysfunction while in illiberal countries like Russia and Turkey it reflects an attempt to fill the void left by the failure of Western notions to catch on. The problem, she added, is that “the Western political leadership at the moment is too weak to fight the tide.”

The Republiscum clowns have already been sent in, and most have realized that they have nothing to lose and maybe something to gain by jumping from the clown car onto the trump bandwagon or offal cart.

Trump does not need either brownshirts or blackshirts to get to where he wants, and via his ignorance, he has already attempted to compromise the loyalty of our Armed Forces. But, to revert to a cliche, it's not possible to step into the same river twice.

But I fear that we HAVE arrived at a potential turning point, the unavoided result of over forty years of overt and covert racism on the part of the Republiscum party, exacerbated by over 30 years of "greed is good" and active efforts by Republiscum justices of the Supreme Court to replace "government of the people, by the people, and for the people" with "government of the people, by the corporations, for the oligarchies," bringing us now to a point when the active plans of a demagogue -- who actually has NO plausible solutions for ANYTHING -- to implement our own versions of the Nurnberg laws and to plan for the U.S. to commit war crimes is seen by a grotesque number of people -- including many of those in the so-called "mainstream media" as being no big deal.

I sincerely hope that Hillary stops taking people for granted. My fear is not so much that they will end up voting for the piece of trump, but rather that they don't bother showing up. (If Vidkun Quisling and Rick Santorum's names can be repurposed to accurate reflections of their merits and values, there's no reason trump's can't also.) Dropping Debbie Wasserman-Schultz, who has been worse than useless, is only a minor start. Where are the Democratic voter registration campaigns? And when will Bernie decide that it's past time that he stopped doing trump's dirty work for him?